The Triage Center is an Infantry healing structure built by the American army in Company of Heroes. Its only purpose is to restore injured infantrymen back to full health, which it does at an impressive rate. This is similar to how engineering units repair damaged vehicles. The structure cannot reinforce infantry squads, nor does it revive infantry who have fallen in the field of battle (see Medic Station), but restoring infantry to full health extends their combat survivability - very important for an infantry-heavy faction like the American army.

American strategies often revolve around the constant, forceful use of Infantry units. The infantry are largely considered expendable, but with such strong reliance on their use, anything that can be done to keep them in good fighting condition is important. Some American structures are responsible for reinforcing units that have lost one or more men. Others are responsible for retrieving fallen but live infantrymen and reconstituting new units. The Triage Center, however, is tasked with making sure that infantry who have come back with injuries are quickly restored to their full combat abilities.

20. This makes it a relatively expensive structure given its narrow abilities (or rather, singular ability) but this is so important to the Americans - especially during the early stages of the battle - that the price is often worth paying.

The structure itself is simply a small shack with open sides, filled with medical supplies. It is flimsy, even by American structure standards, and so should be kept in good repair to avoid it being destroyed.

As soon as it is built, the Triage Center begins radiating a constant healing aura at a radius of 15 meters around itself. Any infantryman inside this aura who is at less than 100% of his maximum health will receive +2.5

+2.5 per second. This healing effect will return an almost-dead Rifleman to full health within no more than 20 seconds.

The aura continues to work as long as this structure remains standing - there are no extra costs involved. Note that other Allied infantrymen can also enjoy this aura - even British troops.

The Triage Center is often placed right in front of the American Headquarters. This way, soldiers retreating to the HQ will immediately receive healing when they arrive, reducing micromanagement.

The Triage Center is extremely important during the early game, when almost all units available to the Americans are at least partially infantry-based (injured weapon crews receive the same healing effect!). Any company that relies heavily on infantry, including both the Infantry Company and Airborne Company will likely need to keep this structure throughout the entire game. Even the Armor Company will prefer having a Triage Center operating at the base than none at all.

Note that you can construct two or more Triage Centers at the HQ if you have the resources and space, but the effect is not cumulative (i.e. this will not give you faster healing when the areas are overlapping). It will, however, increase the size of the area covered by the healing auras, and some players prefer this for even more reduced micromanagement.

To avoid confusion, it may be necessary to explain the difference between the Triage Center and the Medic Station - two buildings constructed by the Engineer Squad that deal with healing wounded infantrymen, but work in completely different ways.

As the overview section above explains, the Triage Center heals infantrymen by slowly raising their Health

Health. It can only affect infantry who are alive but have less than 100% health. For example, if a Riflemen Squad loses a man, and the rest are injured in combat but make it back to base, those remaining 5 men will be healed by the Triage Center until each of them is back at 100% health. The sixth man will remain dead, and can only be replaced by reinforcing the unit from the American Headquarters or any other structure/vehicle with this ability.

The Medic Station, on the other hand, does not provide healing to surviving members of the squad at all. Instead, it sends out medics to pick up infantrymen who have fallen in battle, but not outright killed. These men can sometimes be seen writhing in agony on the battlefield bathed in their own blood. They are no longer considered part of their unit, cannot move or receive any commands, and will eventually die "completely" if a medic does not reach them. The medic will grab such infantrymen and drag them back to the Medic Station, whereby they are "stockpiled". When 6 men have been "stockpiled", a completely new Riflemen Squad is created. These men are not returned to their former units at all.

Another important difference is location. A Medic Station is considered a Defensive Structure, and therefore can be placed in any captured and connected territory on the map - even far from the American Headquarters. This is essential, as the Medics it sends out can only retrieve fallen men within 150 meters of its position. The Triage Center, on the other hand, is a "Base Structure", and can only be placed within your HQ Territory. Units seeking healing from the Triage Center must therefore return to base - they cannot receive this treatment anywhere else on the field (unless they find a British Casualty Clearing Station willing to heal them...).

The ability to keep sending your infantry units at the enemy lies at the core of the American strategy for the early and middle parts of the game - and for some companies well into the late stages. Injured infantrymen, while able to move and fight like any other, will not be able to survive as long under enemy fire as 100% healthy troops. Therefore, the ability to heal injured soldiers after combat ensures their survival, increasing the unit's effectiveness during the next battle.

Fortunately, the Triage Center provides this healing service for free (other than the cost of the structure itself), and the American commander will do well to use this to his advantage. Whenever a unit is not immediately required to do combat with the enemy, and assuming it is not going to be required very soon either, it should be sent back to the American Headquarters to heal its wounds - and of course reinforce if any of its men have been lost.

Note that healing and reinforcement are often required at the same time. It is not common for a unit to survive combat with injuries and no lost men - especially since American infantry are often expected to lead charges and sustain enemy fire. Since returning units will need both services, it makes sense to concentrate both services together at the same spot.

For this reason, the Triage Center is often build directly in front of the American Headquarters. Infantry squads returning from the battlefield will head to the American Headquarters for reinforcement, and while they wait for new men to arrive they will also receive healing at the same time from the nearby Triage Center, killing two birds with one stone and saving both time and micromanagement!

Also, the placement of a Triage Center in this way allows for another important trick: always order infantry to "Retreat" when sending them for a reinforcement/healing combo. This way they'll make the trip there much faster, thanks to the inherent speed bonus of the Retreat command. Of course, it would still take some time for the unit to return to its previous position, since you cannot retreat back downfield.

You can solve this problem by having your M3 Halftracks ferry infantry units back and forth between the American Headquarters and their downfield positions. Note of course that the M3 Halftrack itself can also reinforce infantry units, but it cannot heal them, so you still need to get those units to the Triage Center. Also note that units must disembark from the M3 Halftrack in order to receive any healing.

The Triage Center is one of the two weakest base structures available to the Americans, at only 420

420 (the other is the Supply Yard). Its healing properties also make it a very valuable target for an enemy artillery strike or a hit-and-run attack.

Fortunately, loss of this structure is not much of a major setback - at least not if you can afford to replace it - because infantry healing is usually not that much of an emergency issue. Replace the structure when you can, and try to protect it better next time.

Keep an Engineer Squad near your base at all time to repair this structure if it receives any damage. 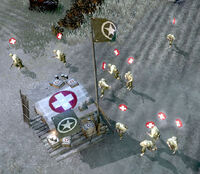 Several Riflemen Squads receiving healing at a Triage Center.
Add a photo to this gallery
Retrieved from "https://companyofheroes.fandom.com/wiki/Triage_Center?oldid=24894"
Community content is available under CC-BY-SA unless otherwise noted.