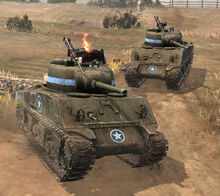 The M4 Sherman (or "Sherman Tank") is the core medium tank fielded by the American army in Company of Heroes. Armed with a strong general-purpose cannon and clad in thick layers of armor, this tank can lead the American armored offensive and engage almost any enemy unit in combat.


An M4 Sherman can operate on its own, engaging targets smaller than itself (especially light vehicles), but is far more useful in large armored groups - especially when grouped with M10 Tank Destroyers and/or M4 Crocodile Shermans. The M4 Sherman's primary task is to engage the enemy directly, soaking damage and keeping the enemy busy while other units maneuver around the flanks.

Retrieved from "https://companyofheroes.fandom.com/wiki/Template:Main_Page/FA?oldid=15536"
Community content is available under CC-BY-SA unless otherwise noted.