The PAK 38 50mm Anti-tank Gun is the main Anti-Tank gun for the Wehrmacht, being very similar in design and use to its American counterpart.

The PaK 38 is an Anti-Tank Gun, a light direct fire Artillery piece made for use against enemy vehicles (and armored structures, if necessary). It's manned by a crew of 3- a Gunner, Loader, and Spotter. It can still operate without the Spotter, though it requires at least 2 men.

The gun is small enough to be moved by hand around the battlefield in its wheeled carriage, and is very easily hidden. The front is protected by a small shield, which isn't particularly effective at stopping bullets but offers meager protection for both crew and gun.

In real life, the PaK 38 was adopted fairly early on and used as the Wehrmacht's main Anti-Tank gun in 1940 and 1941 until sufficient amounts of the PaK 40, though continued to see use until the end of the war. It was also used as the basis for the Panzer III's KwK 38 and 39 main guns. Unlike in Company of Heroes, particularly by 1944 its penetration was very lacking and thus the weapon was only useful against lighter tanks outside of flanking, but like in game, it was an excellent ambush weapon.

The AT gun itself is a good all-around Anti-Tank gun. As expected, it has very good accuracy against vehicles- from a 90% chance at 40 meters to 65% at its max range of 60 meters. While the drop in accuracy is steep, the vast majority of Allied tanks and indeed units in general cannot return fire at this distance- and one of the few that can is the opposing AT gun, which is not a very effective counter. Accuracy against buildings is also very good, but against infantry it is negligible at any distance.

At base, each hit to an enemy vehicle does 150 damage with average penetration- usually enough for most Medium Tanks but rarely able to even scratch the paint of a Pershing or Churchill, or if the weapon is turned on the Axis, Panthers, Tigers, or King Tigers. However, while cloaked, the PaK 38 builds up an Ambush Bonus- a 25% damage boost along with penetration and accuracy boosts, for a total of 187.5 damage- making it a threat to any Allied vehicle.

If you are required to use the PaK 38 without its ambush bonus, its crew needs a mere 3.5 seconds to reload between each shot, making it one of the fastest reloading Anti-Tank cannons in the game, and compensating well for the lower alpha damage and penetration.

As with all Anti-Tank guns, it is restricted to a 40° cone of fire horizontally, and takes at least 2 seconds to rotate to a new heading. This is the weapon's most significant weakness, as the limited cone of fire makes it very difficult to get shots off at close range and means that a quick enemy can easily flank the weapon.

The Pistole Parabellum 1908, commonly called the P08 Luger, is a semi-automatic pistol, used by the spotter of the PaK 38. Its meager 5 damage per hit along with a rather low fire rate and accuracy means that this weapon is almost entirely ineffective- even Engineers or British Officers will have no trouble overcoming this simple deterrent.

Although the PaK 38 is operated like a support weapon team, it gains veterancy through vehicle veterancy upgrades, available at the Kampfkraft Center. Veterancy applies to both existing and new PaK 38s created, as well as applies to any units who recrew the weapon on the Wehrmacht side.

Overall, Veterancy 1 and 2 are not that useful for the PaK 38, as even with the received damage decrease and increased health the crew members are still fairly easily killed in a direct encounter with any other unit. However, the 3rd level increases its damage output by 15.5%, working well in combination with the existing Ambush Bonus, giving it a total of 216 damage, enough for any Allied vehicle to worry about.

The PaK is a mobile AT gun that still provides some serious punch, as opposed to the static 88mm Flak or 17 pounder, meaning it's able to advance just behind the Infantry to keep them supported. It can scrap most enemy light vehicles in only a few shots, and a PaK 38 firing from cover into a vehicle during a Tank vs. Tank encounter can play a very decisive role in the outcome. Its Camo ability will help it greatly on the defense, not only giving it the ambush bonus, but making it far harder to see, and giving it a better chance to make a crucial shot before the enemy even begins to deal with it.

"Mobile" in the PaK 38's terms should not be confused with "fast". Despite being classified as a vehicle, the PaK 38's move speed is terrible, and it's even slower when in camo. It can only barely keep pace with Infantry, and has almost no chance to keep up with any vehicle, even being easily outpaced by the slow King Tiger. On top of that, its cone of fire and the amount of time needed to build up the ambush bonus make it an overall defensively-focused weapon: If you want offensively-focused Anti-Tank power you'll have to invest in Panzerschreks or a StuG IV or Geshutzwagen.

Worse yet, perhaps, is that all of the basic crew members are very weak. Any enemy Infantry unit will easily slaughter an unescorted PaK 38 crew, and Snipers and Mortars can easily take out the weapon, even if it's attempting to retreat. Flanking from light vehicles is also concerning- but barring artillery, all of these problems can be solved simply by escorting the gun.

“Can we hit them from here?”
“Wait! Let me remove the cotton from mein ears.”
“How is that tiny shield going to protect us?”
“Sure we´ll hide this... giant gun.”
“Clear the breach, and get ready to load.” 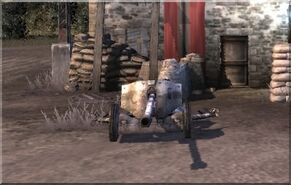 A unmanned PAK 38.
Add a photo to this gallery
Retrieved from "https://companyofheroes.fandom.com/wiki/Pak_38_50mm_Anti_Tank_Gun?oldid=25204"
Community content is available under CC-BY-SA unless otherwise noted.