The SdKfz 250/7 Heavy Mortar Half-Track, or Mortar Halftrack, is a light-artillery vehicle fielded by the Panzer Elite in Company of Heroes: Opposing Fronts. This highly-mobile Mortar team can provide both defensive and offensive fire support wherever it is needed on the map, destroying infantry and light vehicles. It can fire a powerful incendiary round to kill large groups of infantry both in the open and garrisoned inside buildings.

With the Panzer Elite force being mobile and unpredictable, it is no surprise that their light artillery is installed on a fast-moving vehicle as well. The Mortar Halftrack is designed to quickly move to a firing position, unleash a barrage, and then quickly withdraw to avoid return-fire by the enemy. In a vehicle, the Mortar's crew are both faster and better-protected than the Infantry Mortar teams fielded by other factions.

The Mortar Halftrack is constructed at the Kampfgruppe Kompanie, for the cost of 240

4. Though slightly more expensive than the common Infantry Mortar crews, it is also a more valuable artillery piece.

The Mortar Halftrack itself is a small, narrow flatbed truck, with two front wheels, a set of tracks, and a small open-top box at the back. A crew of two mortar-men with an 81mm Granatwerfer Heavy Mortar is carried in the halftrack's box, ready to fire at any target detected within range.

Like all mortar units, the Mortar Halftrack can fire individual shells automatically at enemy targets. It can be told to cease automatic target selection, in order to prevent disclosing its location to enemy counter-artillery fire, or simply to avoid killing friendly units. The mortar can also be told to begin a rapid barrage of a target area, firing 6 shells in quick succession at it.

Aside from its speed, the Mortar Halftrack has another surprise in store: a powerful 81mm Incendiary Round, which can set an entire area ablaze. The subsequent fires will quickly kill any infantry that do not evacuate immediately, and are particularly potent against garrisoned or entrenched infantry that cannot quickly get away.

The Mortar Halftrack is equipped only with an 8 cm Granatwerfer 34 Heavy Mortar. Though slow-firing, this weapon can be used to devastating effect against infantry, whether garrisoned or in the open, and will also do some damage to structures and vehicles.

The 8 cm Gr.34 Mortar, sometimes erroneously referred to as an 81mm Mortar in the game, is a Heavy Mortar issued to all mortar units in the Axis armies. In the Mortar Halftrack's case, it is mounted at the back of a half-track vehicle to improve its mobility.

The Mortar Halftrack's Gr.34 has slightly less range than the common Allied mortars, firing at targets between 15 and 70 meters away. Normally, the weapon fires one shell every 10 seconds, but its firing speed can be increased significantly when firing at a specifically-targeted point.

The 8 cm shells explode with a 7-meter blast radius. Targets within 1.5 meters of the target will receive 36 points of damage, while targets further away receive anywhere down to only 18 points of damage (at 7 meters from the impact point). Unlike other mortars, it does double damage to the M3 Halftrack and M8 Armored Car, and is likely to cause engine damage to any vehicle if it hits the vehicle's rear quarters. Unfortunately, it will cause reduced damage to American tanks (but not British tanks, for some reason).

This mortar can also fire a unique incendiary round, which ignites a wide area around its impact point. The flames cause continuous damage for a period of several seconds, potentially killing any infantry unit within that radius - even those garrisoned inside buildings. This is an extremely useful weapon for killing British infantry inside Slit Trenches.

The Mortar Halftrack has three manually-activated abilities. Two of these abilities allow it to either fire faster or fire a different kind of shell. The third ability prevents the weapon from acquiring targets automatically.

When this ability is activated, select a ground target no less than 15 meters away from the vehicle. The Mortar Halftrack will then move to within 70 meters of the target, and begin a quick-fire barrage of 6 mortar shells. You may select targets within the fog-of-war.

The 6 shells are normal mortar shells, behaving the same as the weapon's normal attack. However, they are fired rapidly one after another, at intervals of 4 seconds between shells (rather than the normal 10 seconds). This saturates the target area with explosions, hopefully knocking out whatever targets are present there.

Note that the cooldown period on this ability is about as long as its duration. Unless you stop the barrage before it is completed, little or no cooldown will occur.

When this ability is activated, select a ground target no less than 15 meters away from the vehicle. The Mortar Halftrack will then move to within 70 meters of the target, and fire a single incendiary round at it. You may select targets within the fog-of-war.

This incendiary round has a large, impressive explosion, but nonetheless delivers very little actual damage. Instead, it sprays the entire area with an incendiary substance (likely White Phosphor) and ignites it. This causes between 5 and 7 fires to erupt within a 14-meter radius of the initial blast.

Any infantryman within one of these burning area will receive about 8 points of damage on average every second. Infantrymen who do not get away quickly will soon die in the flames. Buildings will only receive half of this damage, while vehicles receive very little if any.

Most importantly, infantry inside buildings will burn as easily as those in the open. This is particularly valid for infantry inside a Slit Trench, who are largely protected against most other weapons in the game. This makes the Incendiary Mortar Round one of the best weapons when dealing with British infantry, other than the Incendiary Grenades thrown by Panzer Grenadiers (which are more accurate but need to be thrown from up-close).

This ablity is very useful against machine guns and mortars which have to pack up before they can move, meaning the player either moves out the way of the fire causing heavy damage or retreats, giving you a chance to advance.

Remember that if you wish to use this ability more often, you can pair the Mortar Halftrack with a Munitions Halftrack, which will shorten the cooldown period on this ability to almost nothing (2.4 seconds).

When this ability is activated, the Mortar Halftrack will cease firing of its own volition at visible enemy targets. It will only fire upon receiving direct orders to do so (both normal "attack" orders and special-ability orders), and only at the designated target.

Use this ability to prevent the Mortar Halftrack from revealing its position to the enemy. Remember that when your shells strike an enemy unit, the Mortar Halftrack becomes visible for a short duration, even in the fog-of-war. This allows the enemy to come looking for it, or worse yet - counter-attack it with artillery fire.

You can also use this ability to prevent your mortar from automatically firing into a close-combat situation, where Panzer Grenadiers or other infantry are mixing it up with enemy units at close range. In such situations, even an accurate a mortar shell landing right on top of an enemy squad can accidentally take out your own infantry, not to mention a shell that misses its designated target.

Don't forget to reactivate free-fire by clicking on the ability button again, when you wish the mortar to resume normal firing operations.

Like all other Panzer Elite units, the Mortar Halftrack can attain 3 levels of Veterancy, by accumulating experience points from the killing of enemy units. As it gains levels, its performance will increase proportionally.

Like all other Panzer Elite units, the Mortar Halftrack uses the Panzer Elite Shared Veterancy system to accumulate Veterancy points. In this system, units share experience from their kills with each other, within a certain radius.

Each kill the Mortar Halftrack makes will grant it 100% of the experience value of the killed unit.

In addition, it will pass 50% of that value to any Panzer Elite units within 35 meters of itself.

Vicariously, the Mortar Halftrack receives 50% of the experience value of kills made by other Panzer Elite units within 35 meters.

Every time the Mortar Halftrack gains a level, you'll be asked to choose which Veterancy Upgrade you wish to apply to it - either a Defensive bonus or an Offensive bonus, but not both. You can choose a different bonus at each Veterancy level, if you want.

The bonuses described below are specific to each level. Due to the way they are applied on top of each other, when computed together (see below) they may or may not add up as you may expect.

When these bonuses are computed together with each other as well as the unit's basic statistics, the results at each level are as follows:

* Click the button at the top-right corner to view the entire table.

Due to the reduced likelihood of the Mortar Halftrack coming under fire from enemy weapons (with the possible exception of counter-artillery fire), you may want to select the Offensive Veterancy bonuses which will significantly increase the weapon's accuracy and firing speed. If you want a faster-moving mortar piece that can survive enemy counter-barrages, you can invest one or more levels in Defensive bonuses - but it's better to get the defensive bonus on the first level since that is the largest bonus.

As with any other army, the judicial use of light artillery can be very useful for dislodging enemy infantry from prepared positions, or bombarding a large group of enemy units to kill or damage some of them. The Mortar Halftrack has the innate advantage of being able to maneuver rather freely between barrages, thus protecting it from counter-battery fire or enemy flanking maneuvers.

When a Mortar Halftrack is available, all you need is a target. Reconnaissance of enemy position(preferably executed by Kettenkrad or the Schwimmwagen) will reveal defenses and emplacements you can bombard. You can target these during downtimes just to harass the enemy, or you can bombard a position just prior to a full attack in order to weaken the defenders.

More importantly though, the Mortar Halftrack is extremely useful for killing enemy infantry protecting an approach or sector point from the safety of a building, bunker, or Slit Trench. Mortar shells are especially useful against such targets, since they have bonus accuracy against buildings (only in regular fire mode though, not targeted barrages). Against infantry in Slit Trenches you may want to use Incendiary Rounds, as these don't need to score a direct hit and are also more likely to kill the infantry at all.

In general, you should keep your Mortar Halftrack away from enemies at all times. It has no weapons with which to defend itself in close combat (the shells have a minimum range of 15 meters!), and its armor is not sufficiently heavy to stop even small arms fire. 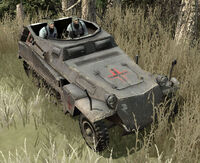 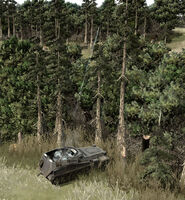 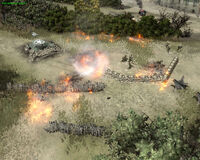 The effect of a single Mortar Halftrack Incendiary Round.

A Mortar Halftrack, top view
Add a photo to this gallery
Retrieved from "https://companyofheroes.fandom.com/wiki/Mortar_Halftrack?oldid=26887"
Community content is available under CC-BY-SA unless otherwise noted.