The Medic Station is an infantry retrieval and reclamation building constructed by the American army in Company of Heroes. The two Medics attached to this structure will automatically seek out and retrieve wounded infantrymen. Once enough have been collected, the structure will spawn a fresh new Riflemen Squad, free of charge.

American infantry are expected to die in combat. Riflemen Squads are powerful in groups, but each riflemen is individually vulnerable. Engineer Squads are unlikely to survive combat against anyone. As a result, casualties among infantry are expected to be severe in most battles. The Medic Station allows the Americans to offset some of these losses, by collecting wounded infantrymen from the field and reconstituting them into new Riflemen Squads.

Medic Stations are built by Engineer Squads for 150

150. Once constructed, the station spawns two Medics, who will linger by the structure and wait for the opportunity to collect injured infantrymen, as explained below.

The Medics will only travel up to 150 meters from the station, and only when an infantryman falls and is not killed outright (actual corpses are simply left on the field). There is no need to issue specific orders to the Medics - they'll collect casualties automatically.

Once a total of 6 infantrymen has been collected at all Medic Stations, the last station to collect a fallen man will then automatically spawn a completely new Riflemen Squad, completely free of charge. This effectively saves 15-25% of the resource expenditure on replacing these squads, given the standard rate of injuries vs. outright death.

When any infantryman is brought down to 0 health, he will fall in battle. However, unless the damage done to him is too severe, he has a chance to survive the ordeal, though with mortal wounds. He can then be seen wriggling on the ground in a pool of his own blood. Mortal wounds occur rather rarely, about 15%-25% of the time. The rest of the time, the soldier is killed outright.

Nonetheless, while the infantryman is not capable of fighting anymore, he is still alive and can be rescued from the battlefield. This can only happen if the infantryman was mortally wounded within 150 meters of an existing Medic Station.

To save this soldier, the Medic Station will send out one of its Medics (if either of them is available at the time) to retrieve the fallen soldier. The Medic will make his way to the fallen infantryman, spend a second or two checking his wounds, and then lift him and carry him back to the Medic Station. Once the Medic reaches the station, the wounded soldier is placed inside.

Immediately once 6 fallen infantrymen (whether Riflemen, Engineers, Snipers or even team weapon crewmen) have been collected in this way, a completely fresh new Riflemen Squad is created, automatically and free of charge. This requires that you have at least 6

6 available, to accommodate the new unit. Otherwise, the game will wait until 6

6 becomes available, and then create the new unit. In the meanwhile, no more wounded will be collected.

Medic Stations can be a great boon during the early stage of the battle. Construct one early, and the losses you incur during initial confrontations with the enemy could be at least partially covered by reclamation. This can easily surprise your enemy with a large number of Riflemen Squads appearing on the battlefield, more than should've been possible given normal resource accumulation.

Remember to place the Medic Station far enough forward that it can retrieve your soldiers. The station only has a range of 150 meters, so it has to be pretty close to the combat zone.

If you're going to be using a lot of infantry in the later stages of the game (especially with the Infantry Company Command Tree), more Medic Stations are recommended. They'll help you keep the pressure on your enemy.

Place several Medic Stations close to the front lines to retrieve your fallen troops, making sure that their retrieval areas (150 meters) cover all the major battle sites. If possible, place these in protected areas, such as behind building or hedgerows and out of the enemy's direct line of fire. Should all Medic Stations be destroyed the game remembers how many men have already been retrieved, so when creating a new Medic Station you will pick up where you left off in terms of accumulating men towards receiving a new Riflemen Squad.

Note that vehicle-based armies might prefer to avoid constructing Medic Stations at all, or will get rid of existing stations when the late game rolls in. The reason is that you may end up accumulating more Riflemen Squads than you have Population Cap

Population Cap to support - causing you to be "stuck" with a large infantry force when you've been grooming your army for vehicle-based operations. Of course, you can alternately just use your new riflemen to keep pressuring the enemy, or lead the armored assaults, essentially "sacrificing" those units to gain tactical advantage and reclaim the Population Cap

Population Cap points you need for more vehicles at the same time.

Another way to use fresh riflemen squad is to create weapon teams. This is especially useful in conjuction with supply drops, a command ability available for Airborne Company. Single riflemen squad can take both weapons and will disappear, creating two new units, what will help in creating more balanced army.

The Medic Station is an exposed structure usually found close to the front lines. As such it is vulnerable to enemy attacks and artillery bombardments, which can knock it out.

Note that Medics can be fired at by enemy units. This doesn't happen automatically (the AI won't ever do this voluntarily either), but enemy human players can and will shoot at your Medics if they can, to prevent them from collecting your wounded infantrymen. There's little you can do about this except perhaps escort the medics with protective units, but this is probably a little too much of an inconvenience in most battle situations. 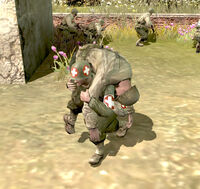 A Medic retrieving a wounded Rifleman from combat
Add a photo to this gallery
Retrieved from "https://companyofheroes.fandom.com/wiki/Medic_Station?oldid=24412"
Community content is available under CC-BY-SA unless otherwise noted.