The 76 mm Gun Motor Carriage (G.M.C.) M18 or the M18 Hellcat is a reward vehicle for Company of Heroes: Tales of Valor, replacing the M10 Tank Destroyer.

It is also a tank destroyer armed with a M1A1C 76mm gun assembly by default, however this version is not as effective as the Sherman's, albeit it is more effective than the unupgraded gun. But unlike the M10, it has more armor, granting it longevity against anti-tank fire and giving it a more frontline role in the field. Un-upgraded, it has no defense against infantry, but it can be upgraded by having a personnel inside the turret to man the M2HB .50 caliber machine-gun. All these, makes it an effective spearhead against tanks and infantry in conjunction with the tried-and-tested M4 Sherman. Simply put, it is an upgraded tank destroyer.

It also has one bonus that the M10 doesn't have: camouflage. When stationary, it can be set up to camouflage itself, giving it a damage bonus and first-strike capabilities.

This tank destroyer acts like some of the German's ambush tank destroyers. It can camouflage, allowing it to ambush incoming armor and giving it a first-strike bonus. Use this ability when on the defensive line, as it cannot move while on this state, or give them camouflage at the back of the assault force, slowly pushing back any resistance with their damage bonus. Because of their thick armor, they are capable of deflecting infantry enfilade and can push through any lightly armed infantry and even matching the Sherman's frontline role in combat. To increase its survivability in combat, have it escorted with Engineers to repair it on the field, or if available, use the "Field Repairs" ability when using the Armor company commander.

Remember to have it upgraded to defend itself against incoming infantry - it is the only type of tank destroyer in the American arsenal that has this sort of defense, use it. But keep in mind that it cannot move on its own alone; it trades off firepower and speed with armor, meaning it has less armor-piercing capabilities than the M10, and must be used en masse.

In terms of armor and defense, it wins hands down compared to the M10, as it can soak more damage and can be on the front without much of a problem. This in conjunction with Sherman tanks, and it can provide a spearhead for an assault. Additionally, it can provide defense by camouflaging itself, increasing its damage output against enemy tanks when camouflaged. This is an ability that the M10 lacks.

However, the M10 is a dedicated tank destroyer. It can outflank and outgun any panzer it encounters, but at the cost of having lesser armor and defense than the M18. So it needs support from heavier tanks.

This makes the M18 a jack-of-all-trades tank destroyer, capable of dealing with tanks and soaking damage, and can even ambush targets with its camouflage. With this given, it is more of a frontline and an ambush vehicle, whereas an M10 is more effective at the back of an assault force or at full speed, flanking panzers easily, but at the cost of less armor.

Unlike the M10, it has less armor penetration, sacrificing this trait with its armor and anti-infantry defense. It is slower than the M10, being only as fast as a Sherman. This can give the unit some frontline advantage however, because this means a Hellcat will never outrun a Sherman, like a M10 will probably do, if careful micromanagement is not involved. Because of its slightly bulkier design, it is more likely to get hit by the enemy. Just like any other tanks, it is susceptible to mines, anti-tank weapons, rockets, mortars and missiles.

"Happy as a turtle in mud!" 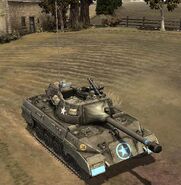 M18 Hellcat next to the M4 Sherman. 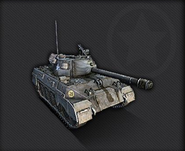 The details of this unit in real life can be found on this page .

Retrieved from "https://companyofheroes.fandom.com/wiki/M18_Hellcat?oldid=26681"
Community content is available under CC-BY-SA unless otherwise noted.