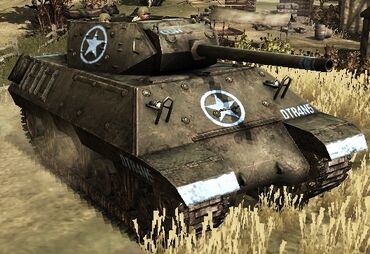 "Wolverine, on the prowl." 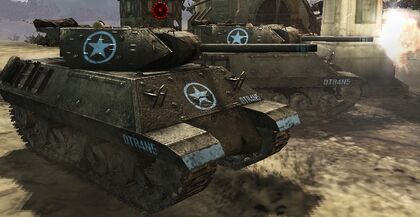 Although it packs a powerful punch, it sacrifices protection for speed and mobility. The M10 Tank Destroyer is lightly armored so it can not take a lot of punishment like the M4A3 Sherman, and anti-tank guns like the Marder III can knock it out quickly. The tank destroyer itself can carry only the primary armament and does not have any secondary armament, meaning that attacking infantry will never suffer suppressive fire. Infantry equipped with Panzerschrecks such as the Stormtrooper Squad, Grenadier Squad, and Panzer Grenadier can easily blow the tank destroyer into pieces. The M10 Tank Destroyer should never be deployed alone. Heavier vehicles like the Tiger, King Tiger, and Jagdpanther, with their 88mm gun, are more than capable of taking out these lightly armored vehicles.

Despite its poor protection, it is one of the heavy vehicles that will be frequently built by Allies Commanders in multiplayer mode because it is cheaper than an M4A3 Sherman. The M10 Tank Destroyer is heavily used by many Allies Commanders. With their powerful guns they are very hazardous to panzers and will prioritize them as targets. A notable counter would be groups of Stormtrooper Squads/Panzer Grenadiers with the panzershreck upgrade or the deployment of AT guns.

Retrieved from "https://companyofheroes.fandom.com/wiki/M10_Tank_Destroyer?oldid=9139"
Community content is available under CC-BY-SA unless otherwise noted.