The Willys MB Jeep, or just Jeep in-game, is a light reconnaissance vehicle fielded by the American army in Company of Heroes. Fast, though fragile, the Jeep's primary feature is an extremely extended sight-range (one of the longest in the game) which allows it to spot enemy units well before being detected by them. The Jeep also has the ability to detect camouflaged units at a good range. On the other hand, it is very lightly armed, and will not survive combat with most enemy units.

The first vehicle to become available to the Americans is usually the Willys MB Jeep (also known as the Ford GPW Jeep during the war). Acting as a support unit for early-game infantry operations, this unit is one of the best scouts available to any faction.

The Jeep is constructed at the Barracks, for the price of 220

3, making it one of the cheaper vehicles in the game. It is a 4x4 wheeled vehicle, open-topped and unarmored. It is crewed by two men: a driver, and a gunner manning an M1919a4 Light Machine Gun mounted on a pintle in the middle of the vehicle.

The Jeep is a scout vehicle, which makes use of two primary advantages: a high top speed, and a very impressive sight-range. The Jeep can see up to 55 meters away, further than any other unit in the game. This allows it to spot enemy units at a great distance, well before those units can spot the Jeep, allowing the vehicle to monitor enemy movement and positions without exposing itself to enemy fire. Most units have a sight-range of only 35 meters.

In addition to straight sight, the Jeep can also detect enemy camouflaged units from a good distance - at least 18 meters away. This allows it to effectively hunt for enemy Snipers, whom it can kill easily with its Light Machine Gun.

On the other side of the coin, the Jeep itself is by far not an impressive combat unit. With just a Light Machine Gun, and virtually no protection, the Jeep will not last long against direct enemy fire from any weapon. At most, a Jeep can act as a support unit, flanking enemy infantry while your own infantry keep them busy. It will rarely be able to destroy (or survive combat with) an enemy unit in one-on-one combat.

Therefore, Jeeps are confined almost entirely to scouting and spotting duties. The vehicle can lend its extended sight-range to other units, allowing them to fire beyond their own sight-range, or provide line-of-sight to an enemy position in order to target it with Command Abilities (like an off-map artillery strike, etc.). Its most combat-oriented task would be to search for enemy Snipers and kill them, something it does surprisingly well.

Note that for the Armor Company, the Jeep has the added ability to capture Strategic Points - assuming the Raid Command Upgrade has been acquired. If so, the Jeep can perform harassment by quickly grabbing territory from the enemy whenever they are busy elsewhere, then retreating to friendly territory to avoid retaliation. This can keep an enemy off-balance.

The Jeep is armed only with an M1919a4 Light Machine Gun, mounted on a pintle at the center of the vehicle. Though a little more accurate than most vehicle-mounted LMGs, this weapon does not have any real combat worth, except for killing Snipers.

This belt-fed automatic weapon is a standard issue vehicle-mounted machine gun. On the Jeep, one such weapon is mounted on a pintle at the center of the vehicle, facing forward.

The M1919a4 on a Jeep is a relatively poor weapon. It fires in long, 2-3 second bursts, of 14-21 bullets per burst - and is surprisingly accurate for a vehicle-mounted MG. However, it delivers a relatively low amount of damage: 5 points per hit, with a serious damage reduction against most targets (even against most infantry units). It can take upwards of 4 bursts to kill a single infantryman with this weapon.

Additionally, this M1919a4 has no Suppression ability whatsoever, despite being an accurate rapid-fire weapon. This makes it even less useful against infantry, the only targets it can actually damage with any reliability.

The one target that this weapon is effective against would be the Sniper. The Jeep's M1919a4 does not suffer a damage reduction against this target, and being a single infantryman, it is easy to kill. Coupled with the Jeep's ability to spot camouflaged Snipers at a good distance, this is one of the best weapons for eliminating them.

Note that the M1919a4 on a Jeep can only fire in a forward arc, 60° left or right of the vehicle's current heading. It cannot swivel any further beyond this arc.

As an American unit, the Jeep can gain three levels of Veterancy. Each level brings its own specific benefits, increasing the unit's combat potential and/or survivability.

Like all other American units, the Jeep obtains Veterancy points by killing enemy units. It receives 100% of the experience value of each unit it kills. Once it has accumulated a sufficient number of Veterancy points, it will automatically advance to the next level, gaining the related bonuses immediately.

American units do not share Veterancy points with one another. To receive points, the unit must personally kill an enemy unit.

At each Veterancy level, the Jeep gains a specific set of bonuses as listed below. These bonuses are cumulative with each other.

The use of a Jeep is quite specialized: it serves as the American army's best patrol/scouting unit. It complements the hard-to-detect but slow Sniper, providing a scout that can move quickly and remain out of enemy detection range at all times.

Some players prefer to forgo the Jeep entirely, as the unit takes up 3

Population Cap points. Still, when used properly, the Jeep can be worth those points, and more.

As a fast scout, the Jeep can be sent on patrol along the front lines. Thanks to its enhanced sight-range, it can pick up any enemy advance approaching your territory, allowing you to react with your mobile defense forces and possibly strengthen your Passive Defenses at the enemy's estimated target point.

Due to the general lack of Axis defensive construction, it is usually also possible to send the Jeep on deeper scouting missions into enemy territory. The Jeep can avoid enemy positions and units simply by staying just far enough of them to remain undetected. Remember that most units have a sight-range of 35 meters, while the Jeep can see 55 meters away. This means you have a 20 meter advantage, so as long as you keep the enemy more than 35 meters away, you can see them and they can't see you.

By sending the Jeep into enemy territory, you can clear the Fog-of-War to allow calling in powerful off-map abilities, like the Infantry Company's Howitzer Shoot or the Airborne Company's Airborne Infantry and Strafing/Bombing Run. You'll also get a good idea of the kinds of units the enemy is keeping secret from you.

Another, less used, tactic, is to have the Jeep scout ahead of an armor column to give early warning of anti-tank weapons. Note: this tactic is usually suicidal for the unit.

Spotting for Other Units Edit

One important possibility is to use the Jeep together with a long-ranged unit, acting as a spotter. Units like the Sniper and especially the M1 57mm Anti Tank Gun have a firing range that is significantly longer than their sight-range, which means that under normal conditions they cannot fire as far as their weapons would potentially allow.

By keeping a Jeep next to such a unit, that unit will be able to maximize its range potential, attacking enemies at a very long distance. The Jeep can either sit right next to the attacking unit, or slightly ahead of it, to extend sight-range by a significant amount and allow such attacks to occur.

Again, this is only useful of the supported unit has a long attack range. M1 57mm Anti Tank Guns are the epitome of this as far as the Americans are concerned, because its maximum firing range is a whopping 60 meters. With a Jeep parked 5 meters ahead of it, it can snipe at enemy units and positions from well beyond their own retaliation ability. Note however that this tactic may invoke an enemy artillery strike, so be ready to pack up and move away at any time.

With the Armor Company's Raid Command Upgrade, all Jeeps acquire the ability to capture Strategic Points. The Jeep then becomes one of the fastest unit capable of doing this, along with the Panzer Elite Kettenkrad and Scout Car.

Coupled with its ability to avoid enemy units and positions thanks to its superior sight-range, the Jeep can be employed to harass the enemy by quickly entering his territory, grabbing an exposed Strategic Point, and running away as soon as the enemy reacts. If you can keep this up, the enemy will be left off-balance, trying frantically to plug all the gaps in his defenses and neglecting actual efforts against you. This both disrupts the enemy's economy (especially if you take out sectors along his supply lines) and buys you time to set up your own defenses and build up assault forces.

Note that this tactic eventually becomes less useful as enemy defenses grow thicker. This is especially true when playing against the Wehrmacht, since like the Americans they can build Observation Posts to protect their Strategic Points from quick capture. The Wehrmacht will also eventually protect their sectors with Bunkers, preventing such raids. The Panzer Elite might instead mine or booby-trap their own Strategic Points.

The Jeep is one of the weakest units in the game. As discussed above, it barely has any offensive capabilities, and its defensive properties are equally bad. The Jeep has no armor, and thus can be damaged by any weapon (including infantry small-arms). Due to low health, it will rarely survive for long under any kind of fire. Curiously, though, it is capable of survivng a direct hit from a Pak 38 50mm Anti-tank Gun, though just barely.

Fortunately, the Jeep does have one important benefit: it is very hard to hit while moving. Most weapons will get severe accuracy reductions when firing at a moving Jeep. Therefore, you can try to rush past an enemy, and should try to stay moving even when engaging an enemy directly.

Note that this is not guaranteed to keep your Jeep alive. A single lucky hit from an Anti-Tank cannon will usually destroy the Jeep entirely, and rapid firing guns (like the Flakvierling 38 20mm AA or even a Heavy Machine Gun) do not rely on accuracy to begin with. 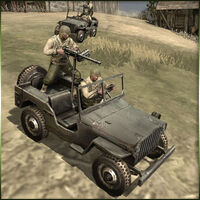 A pair of Jeeps on combat patrol

A Jeep engaged in combat
Add a photo to this gallery

Retrieved from "https://companyofheroes.fandom.com/wiki/Jeep?oldid=25225"
Community content is available under CC-BY-SA unless otherwise noted.