Start a Wiki
“Load up into the Halftrack!”

The SdKfz 250 Infantry Transport Halftrack, or Infantry Halftrack, is a Panzer Elite transport vehicle featured in Company of Heroes: Opposing Fronts. Lightly-armed and barely-armored, the Halftrack is used for quickly ferrying multiple units of Panzer Grenadiers and other infantry across the map. One of the key features of this vehicle is its ability to reinforce those units out in the field.

The Panzer Elite force is essentially a Motorized Infantry battalion, where infantry and vehicles must operate in close coordination. For such a battalion, the ability for infantry to keep up with vehicles is paramount, and the Infantry Halftrack is the primary method to achieve this.

Created by the Kampfgruppe Kompanie, an Infantry Halftrack costs 240

4 to produce. It is a small flatbed truck with two front wheels, a set of tracks, and an open-top armored enclosure at the back. An MG42 Light Machine Gun with dedicated gunner are situated at the top of the driver's cabin. Infantry can be loaded into this truck through a hatch at the rear of the vehicles or up over the sides.

The Infantry Halftrack can carry up to 8 infantrymen (1 or 2 squads max.). By doing so, it provides them some safety and most importantly speed as they cross the map. This makes them fast enough to travel alongside other vehicles, forming a combined assault force. It also allows them to quickly respond to enemy attacks along the front lines.

While loaded into the Infantry Halftrack, the infantry units themselves are protected from Suppression, and will only receive 50% damage from nearby explosions (0% from small arms). Also, up to three infantrymen will visibly occupy the truck's open-top rear box, and can independently target enemy units with their own weapons. If the truck is destroyed, about 75% of the vehicle's occupants will be able to escape with their lives.

In addition to this, the Infantry Halftrack has the ability to reinforce any infantry unit within 20 meters of its position. This is an extremely useful ability, because Panzer Grenadier squads are very small (3 or 4 men at most) which often means they need to retreat and replenish after one or two men are killed in order to avoid being completely wiped out. Keeping an Infantry Halftrack around allows infantry to reinforce near the front lines, inside enemy territory, or even during battle if necessary. It removes the need to constantly retreat those units to HQ territory or set up a nearby Reinforcement Point - as long as the halftrack remains alive.

The Infantry Halftrack is armed with a single 7.92mm MG42 Light Machine Gun, mounted on a pintle at the front of the vehicle. This weapon can engage, suppress and kill enemy infantry units with relative ease.

The standard Light Machine Gun for all Axis forces, the MG42 is a belt-fed automatic weapon capable of rapid fire. It is useful for killing enemy infantry, which it does at a surprising speed.

The game uses many different "variations" of this weapon for the many infantry units, buildings and vehicles that employ it. The Infantry Halftrack's version has a range of 35 meters (sight-range), does 5 damage per bullet, though the gunner for this weapon is a little green and thus less accurate with the weapon than most other MG42 users. The LMG fires 30-bullet bursts, with a 3.5-second delay between each burst.

This MG42 delivers a reasonable amount of suppression per bullet, especially at closer targets. It will probably kill half an infantry squad before it can suppress the remaining men though.

The weapon can swing around in a 120-degree arc covering the front side of the vehicle. To engage targets in other directions, the Infantry Halftrack has to turn to face them.

The only manually-activated ability of the Infantry Halftrack is the ability to reinforce infantry units in its vicinity.

Any infantry squad within 20 meters of the Infantry Halftrack can replenish lost men for a specific cost and duration determined by the type of unit being reinforced.

Note that infantry garrisoned inside the vehicle need to exit it in order to can reinforce.

You may reinforce even inside enemy territory when the Infantry Halftrack is nearby.

Like all other Panzer Elite units, the Infantry Halftrack can attain 3 levels of Veterancy, by accumulating experience points from the killing of enemy units. As it gains levels, its performance will increase proportionally.

Like all other Panzer Elite units, the Infantry Halftrack uses the Panzer Elite Shared Veterancy system to accumulate Veterancy points. In this system, units share experience from their kills with each other, within a certain radius.

Each kill the Infantry Halftrack makes will grant it 100% of the experience value of the killed unit.

In addition, it will pass 50% of that value to any Panzer Elite units within 35 meters of itself.

Vicariously, the Infantry Halftrack receives 50% of the experience value of kills made by other Panzer Elite units within 35 meters.

Every time the Infantry Halftrack gains a level, you'll be asked to choose which Veterancy Upgrade you wish to apply to it - either a Defensive bonus or an Offensive bonus, but not both. You can choose a different bonus at each Veterancy level, if you want.

The bonuses described below are specific to each level. Due to the way they are applied on top of each other, when computed together (see below) they may or may not add up as you may expect.

When these bonuses are computed together with each other as well as the unit's basic statistics, the results at each level are as follows:

* Click the button at the top-right corner to view the entire table.

Due to the relative weakness of its primary weapon, and the need for the Infantry Halftrack to survive dangerous situations, it is generally recommended that you take the Defensive bonuses at every level. If you wish the truck's weapon to be more useful, at least consider taking the first Defensive bonus, as it has much more impact than the others, then picking Offensive bonuses at levels 2 and 3.

The Infantry Halftrack, though poorly armed and armored, is one of the most important vehicles in the Panzer Elite's arsenal. Its mere presence in a battle can significantly augment the survivability of Panzer Grenadier squads and other infantry, allowing them to reinforce without retreating. Furthermore, the vehicle allows infantry units to move quickly between areas of the map, providing a mobile defensive force as required. It also allows infantry to quickly flank an enemy's position, or even attack from inside the truck.

When using Infantry Platoons, it is usually a good idea to keep the Platoon escorted by an Infantry Halftrack. As it does battle with the enemy, individual squads in the platoon can temporarily withdraw from combat when they've lost one or two men to quickly reinforce at the Halftrack and return to the battle. This allows the infantry to put constant pressure on the enemy, who themselves often cannot reinforce in such a manner. As a result, you will lose fewer squads (regardless of how many men are actually lost), retaining hard-earned upgrades and veterancy. This is especially important for Panzer Grenadiers, who have small squads that can be wiped out rather quickly if they stay in battle for long periods of time.

Try keeping the Infantry Halftrack a little further back when providing this service. You wouldn't want it to get destroyed in the crossfire. Keep an eye on it though, to prevent the enemy from flanking your infantry and taking out the halftrack.

If an Infantry Halftrack is available, remember to use it to transport your troops rather than having them walk everywhere. This will speed up all force mobilizations, allowing you to present a mobile defense at various points in your territory with just a few squads and halftracks. This is particularly important since you cannot built any serious defensive emplacements (at least, without the Luftwaffe Tactics doctrine).

When conducting an offensive, especially with combined infantry/vehicle forces, your Panzer Grenadiers can ride the Infantry Halftrack along the flanks of the attack instead of charging in on foot. This way, you can place them behind the enemy's position very quickly, affording them some protection as they strive towards those positions, and then reinforcing them as they make the flank attack. In these situations, you can even choose not to unload the infantry off the Infantry Halftrack at all - allowing them to fire from the relative safety of the halftrack's light armor.

In an assault on an enemy base, the halftracks can simply drive past the anti infantry defenses and rapidly deploy their infantry before the enemy even has time to mount a defense. This is an extremely effective tactic for surprise attacks. Large numbers of infantry halftracks can even support their infantry during an attack, as in groups they are extremely effective against infantry. Do this with caution however, as the halftracks are very vulnerable to Anti Tank fire.

When confronting enemy tanks, the ability to put anti-tank units behind the enemy is very important. While this can be done with anti-tank vehicles like the Light AT Halftrack, an infantry-heavy army can achieve a similar result with Tank Buster Heavy Infantry loaded onto an Infantry Halftrack.

This unit can drive around the enemy tank, and fire Panzershrecks into the tank's rear armor. In most situations, the tank won't even bother rotating its turret, especially if a high-value unit is engaging it from the front. This gives time for the Panzer Grenadiers to damage or destroy the tank from behind. If you keep the soldiers inside the vehicle, you can even have it run circles around the enemy tank to avoid being fired upon. Otherwise, unload them and get the Infantry Halftrack out of the way quickly so it doesn't get blown to bits.

As with other SdKfz Halftracks, the Infantry Halftrack is very lightly armored. While it has high Maximum Health for its size, and can survive a prolonged small-arms attack, its armor does not deflect bullets so easily and it will eventually be destroyed.

Heavier weapons will easily destroy an Infantry Halftrack. This includes anything from Heavy Machine Guns to tank cannons and anti-tank weaponry. Artillery, even mortar fire, are quite dangerous to this vehicle, as are Mines. Fortunately, if the vehicle is destroyed, every infantryman inside has a 75% chance of getting out alive, but you will still lose the vehicle itself.

“Sir? you got a new halftrack ready for combat!”

When issued with move order:

“We got the coordinate.”
“You heard the commandant, let's move!”

“Fire back! cut them down!”

While moving, under attack: 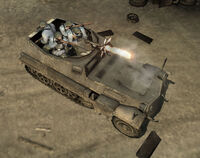 A Panzer Grenadier squad loaded into an Infantry Halftrack, and firing at an enemy unit.
Add a photo to this gallery
Retrieved from "https://companyofheroes.fandom.com/wiki/Infantry_Halftrack?oldid=20895"
Community content is available under CC-BY-SA unless otherwise noted.