Start a Wiki
The Gr. 34 8cm Mortar Team is a light Artillery piece fielded by the Wehrmacht. It is classified as a Support Weapon and available in the Krieg Barracks.

Mortars are simple weapons, being essentially tubes that fire light explosives at enemy troops in a parabola arc, and the Granatwerfer 34 is no exception. The weapon, patterned off of the Brandt mortar used by the French army, is an important tool in the Wehrmacht arsenal.

The long-range, relatively accurate fire of the mortar makes it a good indirect fire weapon in both offensive and defensive scenarios, able to do high damage to any non-armored target. However, because the shells have such a long travel time, they're practically only going to hit static or nearly static targets- but given the nature of the game, there will be no shortage of static enemies in cover, trying to capture sectors, garrisoning buildings or emplacements, and so on.

While relatively mobile, the Mortar must be set up to fire and packed up to move, a process that takes a few seconds- the weapon also must be physically turned when firing at targets not in a roughly straight line out from the weapon. This makes positioning the weapon and timing its moves far more crucial.

Compared to its U.S. Army counterpart, the GrW has better range and accuracy, however the American mortar has more destructive capability, especially against Buildings. The British 3 inch mortar is very similar- indeed, nearly identical- to this weapon, however, aside from the rarely-seen Commando weapon team, Commonwealth forces use emplacements rather than mobile weapon teams.

Like all versions of the weapon, the Wehrmacht mortar is also capable of firing Smoke rounds, to obscure an area. Though accurate compared to its contemporaries, the GrW 34 is still not a super precise weapon, and Smoke will often be off target, especially if used at the weapon's maximum extent- but assuming the smoke at the very least lands between enemy sightlines and the target you're trying to obscure, it's useful nontheless.

The actual crew of the mortar is not trained or equipped to fight. Only the Spotter has a weapon he can use in direct combat and while the MP40 he wields is more useful than the Luger found on the PaK 38's spotter, it still does no substantial damage whatsoever and is only any sort of deterrent to enemies aside from those that are already nearly out of HP. The 2 men on the mortar itself carry no weapons- meaning that if their 3rd man goes down they're totally defenseless. Ultimately, if an enemy closes in on a mortar and no other unit is nearby to protect it, the Mortar should almost always be retreated to safety- keeping in mind that the mortar has to be packed up before, meaning the earlier the retreat, the better.

Note that a single man is not able to operate the GrW 34. If 2 of the squad members of the weapon are killed, the last member will instantly die.

The Mortar team gains veterancy through Support team upgrades, which are available in Kampfkraft Center, which applies to all Mortar Teams, both new and those already on the field. Mortars recrewed by Wehrmacht forces will also use this veterancy, irrespective of the level the Infantry capturing the weapon had previously.

These bonuses effect both the Mortar itself and the Spotter, though the offensive effects given to the Spotter are negligible outside of the rare situation of the weapon being recrewed by Knight's Cross Holders.

Overall, the biggest reason to take veterancy for Mortars is to deal more effectively with enemy Mortars. While these upgrades are nice but unsubstantial global buffs, they will ensure any instances of Mortar vs. Mortar will end in your favor outside of horrendously unlucky occasions.

Any Infantry squad caught by a Mortar Shell is going to take casualties, guaranteed. As long as your mortar team is able to stay outside of an enemy's effective firing range, it has a profound effect on an enemy both directly and psychologically- enemy commanders will be forced to play around the mortar, making otherwise simple tasks like capturing points or taking good cover in combat far more difficult. They can rain hell on enemy support weapons, silence American mortars, and are generally a strong all-around weapon, useful in almost any scenario and strategy.

While a great indirect fire weapon, Mortars have nothing on actual artillery, meaning that more stubborn defenses will often take a very long time to deal with. The low splash of the rounds also gives a very limited area-of-effect compared to shells from a Howitzer, Nebelwerfer, or other larger pieces. If an enemy Artillery piece fires at your Mortar, or offmap support is called on it, it is almost guaranteed dead, before it will be able to do any real damage in response if applicable.

In addition, the actual crew of the Mortar itself is very weak, made further worse by the "dead zone", an area around the mortar lower than the weapon's minimum range, meaning any enemy unit that closes this gap will be able to take free shots at the mortar without the mortar itself being able to respond. Being a static weapon with a low health crew, Snipers can also quickly decrew a mortar in short order, especially since withour reinforcement they only need 2 shots to kill the crew entirely.

Finally, Mortars are of no value whatsoever against armored vehicles, save for the fact that they tend to do engine damage on a direct hit. If a Tank or Armored Car shows up to a sector a Mortar is in, the Mortar team will almost always have to retreat or they'll be killed. 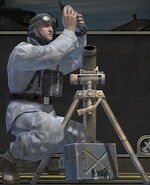 Artist's rendering of a Mortar Team.

Add a photo to this gallery
Retrieved from "https://companyofheroes.fandom.com/wiki/Gr._34_8cm_Mortar_Team?oldid=25322"
Community content is available under CC-BY-SA unless otherwise noted.