Detectors for Radio Triangulation, or "Detectors" are devices planted by the British to monitor enemy movement. They are only available to the British Royal Commandos Support company in Company of Heroes: Opposing Fronts, and only once the Radio Triangulation Detectors Command Upgrade has been purchased. Once three have been placed on the map, any enemy unit moving through the area between these three points will be revealed on the Tactical Map and Mini-Map (but not in the 3D battlefield).

For the British Royal Commandos Support company, the ability to know where enemy units are at any given time is paramount, as it allows Commando units to move quickly through weak holes in the enemy's defense in order to strike at vulnerable enemy units and positions. This knowledge comes from Detectors for Radio Triangulation, which are planted deep inside enemy territory.

To acquire the ability to plant these Detectors, the British commander must purchase the Royal Commandos Support: Radio Triangulation Detectors Command Upgrade, which costs 1 Command Point. Once purchased, four different infantry units receive the ability to construct a Detector:

Detectors may be built anywhere on the map, and cost nothing. They take only a few seconds to set up.

Each Detector has an innate camouflage ability, which is automatically activated once it's built. Enemy units will not see the Detector unless they move very close, and even then they might miss the detector thanks to its minimal size and relative resemblance to environment props. If the enemy unit moves away, having failed to spot the detector, it will become camouflaged again.

Once the Royal Commandos Support: Radio Triangulation Detectors Command Upgrade has been purchased, the following units will receive the ability to construct a Detector:

The construction of a Detector costs absolutely nothing, and takes only a few moments. You can place up to 3 Detectors at any given time. If one is not in the correct position, you may scuttle it and construct a new one elsewhere.

Naturally, Detectors would be next to useless of you could only place them inside your own territory. The idea is to place at least one or two (or sometimes all three) inside enemy territory, to gain maximum coverage of enemy territory.

On its own, a single Detector does nothing. Their function only becomes apparent once three Detectors have been placed.

Three white lines will appear on the Mini-Map and Tactical Map, connecting the locations of the three Detectors. This triangular area is called the "Detection Area".

If at any time you lose any of these Detectors, the triangle will disappear and enemy units will return to their normal hidden state. You may, at any time, construct new Detectors anywhere to replace the lost ones.

Note: Enemy units detected by triangulation are not made visible on the main combat display (the 3D view). They will only appear on the Mini-Map and Tactical Map. 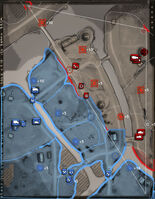 Detection Area as marked on the Tactical Map, with visible enemy units 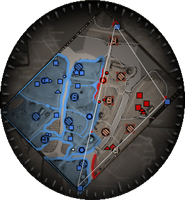 Detection Area as marked on the Mini-Map, with visible enemy units
Add a photo to this gallery

In essence, nothing is easier than placing down three Detectors and reading enemy movement. However, the trick is to maximize the size of the area in which enemies are detected, and of course to detect enemies on their own ground, not inside your territory.

The use of Commandos and other units to install Detectors deep in enemy territory is difficult, but necessary to learn. If it is done successfully, you may be able to view all enemy movement - giving you a significant edge.

This information allows you to coordinate your armored attacks and artillery strikes, but most importantly it will allow you to perform precision Commando Raids by pretty much slipping your Commandos into enemy territory through undefended areas, so that they can strike their target with complete surprise.

As a bonus, good coverage will allow you to tell exactly what units the enemy has, where they are, and whether or not they are coming to attack you.

Three Detectors create a triangle inside which enemy units are detected. Therefore, when deciding where to place a detector, you need to consider which area of the map you want to survey.

Optimally, you should strive to create a Detection Area triangle that covers the entirety of the enemy's territory - or at least as much as possible.

In some maps and situations, this is usually very easy to determine, because the enemy's base will be in one corner, and the front lines will be somewhat diagonal along the map, making his territory somewhat triangular. In such a situation, one detector should go as close to the enemy's base as possible (preferably right behind it in the corner of the map), and two should go just inside your own territory or just beyond it, at either of the other corners. The screenshots above illustrate one such "perfect" positioning.

If the enemy's territory is more square-shaped, or their base is close to the middle of one side of the map, forming a triangle that covers the entire thing is impossible. In this case you need to decide whether you prefer an offensive-style coverage, or a defensive-style coverage.

In this method, two Detectors are placed deep inside enemy territory. The third detector is placed far behind your lines, as far as possible back. This creates a very large triangle, covering a large part of the enemy's land. The area of the triangle is wider the further into enemy territory you go, while it is narrower near your front lines.

This is called "Offensive-Style" because it allows detecting more units close to the enemy's base rather than those close to your defensive line. It allows good artillery bombardment of enemy concentrations, but poor detection of incoming attacks, especially along the flanks.

You can vary this by placing the rear detector (the one in your territory) off to one side or the other. This allows better detection on one side of the map at the expense of the other side.

In this method, two Detectors are placed at the far ends of your defensive line, right behind your defensive structures. The remaining Detector is placed as deep inside enemy territory as possible.

This is called "Defensive-Style" because it'll detect most units approaching your defensive line, allowing you to react with force where necessary. However, it will not detect many units near the enemy's base, where the third point of the triangle is.

Aside from the general location of a Detector, it is important to learn where exactly to place it in order to avoid its detection by enemy troops.

Detectors become camouflaged as soon as they are built, and are generally invisible to the enemy as a result. However, if an enemy unit closes to within a few meters of the detector, it will lose camouflage until that unit moves away.

Fortunately, as illustrated in the picture to the right, properly-placed detectors are extremely hard to spot even when visible. In addition, enemy units do not automatically open fire at Detectors even when they lose camouflage, so unless the enemy is looking at the Mini-Map at the same time the unit passes next to the Detector, it'll disappear a few moments later and the enemy won't be any wiser.

There are several tricks you can learn to minimize the chance of the enemy ever spotting them at all.

Try to place your Detectors in areas where the enemy is extremely unlikely to go. For example, enemy units will usually not go to the extreme corners of the map, nor close to the edges. Unless a road or passageway goes directly next to the edge of the map, enemy units won't really have a reason to go there, and so won't stumble on to the detector.

Similar positions include closed courtyards or tree enclosures that have no strategic value. If neither you nor the enemy are using this location for any purpose, nor have any reason to do so, it is highly unlikely that any enemy units will go there.

Unless a detector is placed right in the middle of an open area, it will not be easily noticeable. It tends to look just like an environment object, especially when placed next to other objects with which it can blend in.

Good objects to blend with include trees, buildings, and piles of crates or barrels. Place the detector as close to these as possible, and it may be extremely difficult to spot!

Finally, try to keep your Detector in the shadows. This will make it even harder to spot.

The primary application for Detectors is their combination with other Royal Commandos Support abilities, including primarily the use of Commando strike teams.

Commandos are often used to perform powerful strikes against unguarded enemy positions or units. The target for such a strike is determined by checking your Tactical Map, locating a lone unit or vulnerable enemy position, and then taking your commando force there to destroy it.

However, since the success of Commando Raids relies mostly on surprise, it is imperative that your Commando force reach that target without being discovered. This is where detectors truly shine, as they allow you to maneuver through enemy territory safely by keeping a constant watch on enemy patrol routes, troop concentrations etc. which you can then avoid on your way to the target.

You can keep the Tactical Map open during such maneuvers to get the best idea of open spots in the enemy's overall defense. However, remember that structures and emplacements are not detected by radio triangulation, and will not appear on your Tactical Map nor Mini-Map. 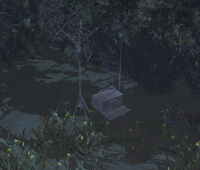 A Detector, camouflaged properly.
Add a photo to this gallery
Retrieved from "https://companyofheroes.fandom.com/wiki/Detector_for_Radio_Triangulation?oldid=17714"
Community content is available under CC-BY-SA unless otherwise noted.