This article is a stub. You can help the Company of Heroes Wiki by expanding it.

Conscript Infantry Squads are the primary infantry units for the Red Army in Company of Heroes 2. It has a cost of 240

6. Conscripts are a squad of six men, equipped with Mosin-Nagant bolt-action rifles. They are also capable of being upgraded to have 7 men with the Mobilize Reserves upgrade from the Mechanized Armor Kampaneya.

Conscripts are cheap line infantry, and must-haves in every Soviet order of battle. They do average damage, and will lose to Grenadiers and Volksgrenadiers in even combat, and are evenly matched with Osttruppen, but due to their large squad size, can hold the line against the German soldiers long enough for other units to come to their aid. However, a capable player can potentially hold off a German assault should they place Conscripts in cover and away from hostile units that specialize in close quarters. Since they have rifles, directly engaging assault infantry is out of the question, unless they can be kept at a distance and in cover.

Their grenade upgrades and Merge ability make them perfect support units in larger battles - even when the units being supported are simply more conscripts. "Oorah!" allows them to quickly run up to vehicles and bust their engines (take note that on average it takes two grenade hits to destroy the engine of a fully repaired medium tank), or threaten stationary infantry with fiery deaths. If munitions are plentiful, it can even be spammed to quickly travel the battlefield. Merging squads allows the Soviet player to retain presence by shuttling conscripts back and forth between his base and the front.

Their large squad sizes also make them perfect for capturing weapons, if the Soviet player has the good fortune to find them. A conscript squad that manages to pick up two light machineguns or two antitank weapons will become a terror on the battlefield against infantry or vehicles, respectively.

Allows the free construction of a sandbag wall. The sandbag wall provides directional heavy cover and can be destroyed or run over, but Combat Engineers can repair it if damaged during the campaign.

This ability is available on winter Maps only. The conscripts can build fire pits to keep troops warm and prevent them from freezing to death.

When deployed, can be used to reveal a large part of the map when tripped by enemy.

The squad lets out a battle cry of "Oorah!" giving the squad a boost in morale and speed. The ability costs 15

15 and is available from the get-go. "Oorah!" will cause the conscript squad to move faster during a short period of time. There are no side effects after the ability wears off. The ability is very useful in an attempt to sprint past machine guns or rush into cover. In multiplayer, "Oorah!" only causes a temporary speed increase and no suppression reduction or damage increase. In the campaign, it slightly increases their damage and accuracy.

Allows the squad to merge into other squads of infantry and support teams that have lost team members (except Scout Sniper).

Conscripts drop to the ground and lie prone, reducing received accuracy and rendering them immune to suppression. Disables movement while active. Available only to certain commanders.

All members of the conscript squad lob an Anti Tank grenade at an enemy vehicle. Damage done varies by the amount of conscript members that have thrown it. Like the regular anti-tank grenade, this ability will inflict engine damage upon vehicle whose health is brought down to 75% at the time the ability is casted.

10. It enables the conscript squad to throw a Molotov Cocktail. Upon impact, the cocktail creates a pool of burning fuel on the ground, damaging all infantry standing in it over time. This is very useful to flush enemy infantry out of cover or out of houses and to speed up the process of killing support teams. It deals much less damage, however, if the enemy runs away from the area of effect. It also has a painfully long animation of a conscript lighting, pulling his arm back and throwing, allowing alert players to quickly move their squads.

Allows the Conscripts to lob a heavy grenade at an enemy vehicle, dealing 80 damage upon successful connection. The vehicle's engine will be damaged if it succeeds in bringing the vehicle's health below 75%. It is essentially the same as the German Panzerfaust, but with a shorter range and smaller munition cost. The cooldown of the grenade decreases at the third level of veterancy.

Available as a passive ability to some commanders, conscripts may replace three of their bolt-action rifles with PPSh-41 sub-machine guns, at a cost of 40

This upgrade is purchased by each conscript squad in the same manner as a weapons package, and adds a 7th rifleman. It increases their durability and damage, as well as the speed at which they gain veterancy and rate of fire, but takes up their one weapon slot to do so, which locks them out of weapon upgrades.

As a Soviet unit, the Conscript Infantry Squad can gain three levels of Veterancy. Each level brings its own specific benefits, increasing the unit's combat potential and/or survivability.

The Conscript Infantry Squad receives experience points for killing enemy units. Once it has accumulated a sufficient number of experience points, it will automatically advance to the next level of veterancy. 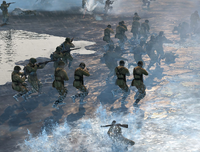 Conscript squads charging through the river.

conscripts escaping an explosion
Community content is available under CC-BY-SA unless otherwise noted.