The Churchill AVRE or Churchill Armoured Vehicle Royal Engineers is a British variant of the Churchill Tank, fitted with a 290mm Spigot Mortar instead of its normal 6-Pounder cannon. It is introduced in Company of Heroes: Opposing Fronts, and is only available to the Royal Engineers Support company. While it has no primary attack other than the manually-activated (and costly) Petard mortar, the mortar itself is so powerful that it turns this into one of the best weapons available for killing masses of Infantry and destroying Buildings. As all Churchill tanks, it is also heavily armored.

The Churchill AVRE is one of three different types of Churchill tanks available to the British Royal Engineers Support Company. Of these, it is most focused on targeted destruction of large Infantry concentrations, enemy Buildings and Defensive Structures of all kinds.

8. You may select a rally point as the destination for the tank when creating it.

Like all other Churchill tanks, this tank's primary feature is its heavy armor, comparable to that of the M4 Sherman, but protecting it almost equally from all sides. This makes the Churchill AVRE very difficult to destroy, even with dedicated anti-tank weaponry and/or anti-tank infantry flanking.

For this ability, the Churchill AVRE pays primarily with offensive capability. Its weapon is unsuitable for destroying enemy tanks. It is also slower than most other tanks on the battlefield.

The AVRE is unique among tanks, in that it has no automatically-fired primary weapon. Its actual primary weapon is the Petard 290mm Spigot Mortar, which costs 35

35 to fire and will only fire when manually instructed to do so. However, the explosion of this mortar has a devastating effect on all non-armored targets it hits. It will destroy any infantry within its radius of effect, and will severely damage buildings (even bunkers), defensive emplacements, obstacles and light vehicles. It will also cause some damage to tanks, though lack of armor-penetration prevents damage to heavily-armored targets.

Churchill AVREs are used as specialty weapons for destroying large groups of infantry or buildings along your avenue of advance. They can deliver a "first blow" during combat to take out a large group of enemies, or create a gaping hole in the enemy's defensive line through which other units can then follow. If necessary, the Churchill AVRE can soak up a lot of damage to protect the infantry advancing alongside it. However, thanks to its incredible anti-infantry capability, it is often best accompanied by anti-tank weapons such as Sherman Fireflies, rather than infantry.

Instead of a cannon, the Churchill AVRE is mounted with a 290mm Spigot Mortar. This weapon does not fire automatically at enemies within range. Instead, the player can use the "Fire Petard Mortar Round" ability (see below) to target this weapon, for the cost of 35

The Petard round is a large high-explosive bomb, that can be launched at any ground position up to 35 meters away (the tank's sight-range).

The petard has a damage value of 500 points, and is one of the most damaging weapons in the game. Once the Petard round hits the ground, it will explode in a gigantic conflagration with a radius of 10 meters. All infantry targets within this radius, including infantry garrisoned inside buildings and bunkers, will be instantly killed. Buildings struck by the Petard may instantly collapse. Obstacles, including man-made and environmental obstacles, will also be automatically destroyed. The same goes for light vehicles (like the Kettenkrad).

Against armored targets such as armored cars and tanks, the Petard has an unfortunate damage reduction. Armored cars will suffer only 75% damage, light and medium tanks will suffer 50% damage, and heavy tanks 25%. This is coupled with the Petard's low armor-penetration, which means that the final damage done to these vehicles will usually be minimal.

Once fired, the Petard takes 20 seconds to recharge. It will not fire again until the "Fire Petard Mortar Round" is activated once more, for the price of 35

The Churchill AVRE is outfitted with one forward-facing 7.92mm Besa Machine-gun. This weapon provides the tank some ability to kill enemy infantry directly in front of it, and unlike the Petard, will fire automatically at targets within its limited firing cone.

The primary purpose of this machine gun is to suppress infantry; it is unlikely to kill very often.

The range of this LMG is 25 meters, around 10 meters less than the tank's line-of-sight.

The Churchill AVRE does not fire its primary weapon automatically: you must manually tell it to fire, using the Fire Petard Mortar Round ability. Additionally, the tank can use the Hull Down Position ability to increase resistance to damage, once this ability has been unlocked.

This ability fires the tank's primary weapon. The weapon will not fire otherwise.

Once the ability has been selected, click on the ground where you wish the Petard round to land. The tank will fire a single round at this target. The circle around your cursor indicates the 10-meter radius of the Petard round's effect.

Note that there is a minimum range of 10 meters. If attempting to select a target less than 10 meters away, the targeting circle will be colored red, and clicking will do nothing.

The weapon takes a couple of seconds to fire after clicking and therefore can be easily canceled. Refunding your munitions.

Once the "Hull Down" ability has been purchased on the Royal Engineers Support Field Improvements chart, it becomes available for all Churchill AVREs until the end of the mission.

To activate this ability, simply click it. The tank becomes immobile as sand bags barricades are erected all around it. The tank can continue firing while this is being accomplished.

Once the process is complete (9 seconds), the tank will have traded its mobility for increased defense. The tank's armor is increased by 25%, and takes only 75% damage from any source.

To release the Churchill AVRE from Hull Down Position, simply click the button again. This is only possible once the tank has been fully entrenched - you cannot stop the entrenching process halfway-through. As soon as the button is clicked, the tank is released immediately from the sandbags (which disappear) and may drive off at once.

The Churchill AVRE is a precision offensive weapon. Its primary gun fires only when told do, and has a devastating effect on its target. It is used specifically for clearing an area of infantry (esp. entrenched or garrisoned infantry), destroying enemy buildings, and clearing fortifications.

Since it has little value in normal face-to-face combat, the Churchill AVRE usually acts as a support weapon, being rolled into combat only when required. Otherwise, it stays behind the advancing force to protect it.

Alternately, it's possible to take advantage of the Churchill AVRE's ability to take plenty of damage (like all other Churchill tanks), by presenting it as a target for enemy fire while infantry and/or tanks advance and flank to destroy an enemy's position.

On the Offense[edit | edit source]

Proper use of the AVRE for offense requires two things:

Reconnaissance is important, because the AVRE will only fire (at most) every 20 seconds, meaning that you must choose your targets carefully. Additionally, if the target area is protected by armored vehicles, the AVRE may be unable to destroy them before they take it out. Munitions are important because the AVRE's main cannon only fires when 35

35 have been paid, and will only fire a single round upon this payment. While a single round causes much devastation, any new targets showing up (or surviving the blast) may require the tank to fire again, costing more Munitions each time.

Therefore, the AVRE is often kept behind the main force of the advance. If the forward troops encounter a difficult enemy position, especially once with entrenched troops or static defenses, the Churchill AVRE can roll in to destroy these defenses in a single attack.

As with all other Churchills, it is also possible to roll the AVRE in first, to act as a meat-shield for the other troops and to draw the attention of enemies in the area while other units move to flank the enemy. This is thanks to the AVRE's heavy armor, and its ability (once acquired) to "Hull Down" to further reduce damage to itself. However, remember that unless Munitions are paid to fire the tank's gun, it can do little against those enemies on its own.

On the Defense[edit | edit source]

Defensively, the AVRE is not a particularly good weapon, unless by chance it is attacked by a large swarm of infantry, which it can then take out with a Petard round (It is able to fully wipe out squads of infantry). In this capacity, it may be useful for guarding infantry-only bridges, where it can act as a bottleneck.

The AVRE does have ample armor, and can soak up damage while holding a position, buying other units time to reinforce it. However, remember that it does not have the capability to successfully repel armor, and that each round it fires will require your manual activation and 35

35. Do this only if your lines are spread that thin, and try to replace the AVRE with another unit(s) when possible.

Remember that, while heavily armored, the Churchill AVRE is not invincible. Powerful anti-tank weaponry can still damage it, and its slow speed makes it more vulnerable to maneuverable opponents and artillery.

Also remember that the main gun will not fire unless paid for and activated manually. The AVRE's other weapon, its forward-facing LMG, has little use other than suppressing infantry directly in front of it.

The Churchill AVRE is only the basic variant of this tank design. The Royal Engineers Support company has two more types of Churchill Tanks available, which are differently specialized in their anti-infantry capabilities.

Churchill AVRE firing a Petard round. 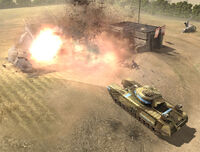 The massive explosion caused by a Petard round.

A Churchill AVRE demolishes a building, killing all infantry garrisoned inside.

Churchill AVRE fascine on tilt-forward cradle
Add a photo to this gallery
Retrieved from "https://companyofheroes.fandom.com/wiki/Churchill_AVRE?oldid=25361"
Community content is available under CC-BY-SA unless otherwise noted.