The Casualty Clearing Station is a British building featured in Company of Heroes: Opposing Fronts. It performs a dual function, acting both to heal nearby wounded Infantry, and to retrieve fallen Infantry from the battlefield to create a new Infantry Section squad. In this respect, it can be thought of as a combination of the American Triage Center and Medic Station in a single structure.

British infantry, while hardy, requires healing from time to time like all other Infantry units in the game. Injuries sustained in the battlefield are permanent unless treated by medics. While most other factions have one structure or another to provide constant healing, the British ration their infantry healing through the Casualty Clearing Station. The station also provides a secondary service by collecting fallen (wounded) infantrymen from the field and reconstituting a new Infantry Section when sufficient men have been retrieved.

The Casualty Clearing Station is constructed by Infantry Sections, for the cost of 180

3 per minute - but does not consume any Population Cap points.

5 available to accommodate it.

In addition to this, the Casualty Clearing Station can be told to heal all infantry within 24 meters. Unlike other healing stations built by other factions, this ability requires manual activation at the cost of 40

40, and will only last for a short period of time (about enough to entirely heal any wounded infantryman). This healing applies to allied infantry within the 24 meter radius as well as your own men.

When an infantryman is brought down to 0 health, he will fall in battle. However, unless the damage done to him is too severe, he has a chance to survive the ordeal, though with mortal wounds. He can then be seen writhing on the ground in his own blood. Mortal wounds occur rather rarely, about 15%-25% of the time. The rest of the time, the soldier would be killed outright.

Nonetheless, while the infantryman is not capable of fighting anymore, he is still alive and can be rescued from the battlefield. This can only happen if the infantryman was mortally wounded within 150 meters of an existing Casualty Clearing Station.

To save this soldier, the Casualty Clearing Station will send out one of its Medics (if either of them is available at the time) to retrieve the fallen soldier. The Medic will make his way there, spend a second or two checking the fallen infantryman's wounds, and then lift him and carry him back to the Casualty Clearing Station. Once the Medic reaches the station, the wounded soldier is placed inside.

Immediately once 5 fallen infantrymen have been collected in this way, a completely fresh new Infantry Section unit is created, automatically and free of charge.

This requires that you have at least 5

5 available, to accommodate the new unit. Otherwise, the game will wait until 5

5 becomes available, and then create the new unit. In the meanwhile, no more wounded will be collected.

The Casualty Clearing Station has the ability to heal nearby infantry for a short duration. This is called the Medical Supplies ability.

When the Medical Supplies ability is activated, all friendly Infantry units within 24 meters of the Casualty Clearing Station are slowly healed for a period of 30 seconds.

The healing rate is sufficient to get most wounded infantrymen back to full health within the allotted duration, though severely-wounded infantry may require a second application of this ability to be fully healed.

Infantry do not need to be within the radius when the effect begins - they can walk into the 24 meter area and then begin to heal. Units leaving the 24-meter radius will stop healing unless they move back inside before the effect ends.

Other than the (very) slow healing bonus given by Captains within the territories they command, this is the only way for the British army to heal its infantry.

Due to the prohibitive cost of creating new Infantry units for the British army, a method to keep infantry in top-shape is of paramount importance. Building a Casualty Clearing Station early can save the lives of many infantrymen, and make sure that once contact with the enemy is made you can already start retrieving casualties to save some resources for later.

Another option is to keep your Captain near a Casualty Clearing Station at all times, so that Infantry can be told to retreat to him instead of the HQ truck. Again, since the Captain is mobile and often requires movement, this may not be much of an improvement either. Naturally, you could always build these stations in each of your forward sectors, so that whenever the HQ Truck or Captain move about, they can always park next to a Casualty Clearing Station.

Always remember to make sure you don't press the Medical Supplies button in vain. The cost is fairly high, so it should only be used when there are actual injured units nearby, preferably several of them. Do not confuse a unit that's wounded with one that's actually missing a few men. It's usually better to reinforce a squad before (or during) the healing procedure. 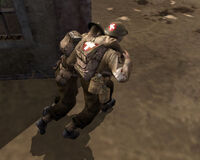 A Medic retrieving a mortally wounded infantryman.
Add a photo to this gallery
Retrieved from "https://companyofheroes.fandom.com/wiki/Casualty_Clearing_Station?oldid=24046"
Community content is available under CC-BY-SA unless otherwise noted.