Carpiquet is the third mission for the British campaign, and the first part of Operation Windsor.

Operation Windsor. Carpiquet Airfield is key to Caen's defense. Royal Commandos from 3rd Battalion are to infiltrate and establish a frontline for a predawn attack by the Royal Canadian Rifles.

News of the British taking Hill 112 has reached Carpiquet. A squad of volksgrenadiers is gunned down by commandos to clear the anti-aircraft site for the glider. Major Blackmore has been assigned to take Carpiquet, and is given commandos to infiltrate the area and take out the enemy command posts, supported by artillery fire from the Royal Scots.

1b) Call in a Tetrarch Gilder

Awarded for successfully destroying the targets of opportunity. 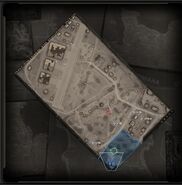 Add a photo to this gallery
Retrieved from "https://companyofheroes.fandom.com/wiki/Carpiquet?oldid=23151"
Community content is available under CC-BY-SA unless otherwise noted.