John D. Mackay was a Captain of the US Army Rangers who served three years of the war. He led Able Company during the Invasion of Normandy, from D-Day to the battle of St. Lo where he died. His closest friend was Joe Conti who he served with since boot camp at Fort Reilly, Kansas. He died on the 25th of July, 1944 in St. Lo after a german Tiger I. tank (commanded by Tiger Ace, Hauptmann Joseph Gunter Schultz) shot an 88mm round right next to him while he was briefing with Sergeant Conti. Following his death, Conti was promoted to Lieutenant to take McKay's position as leader of Able Company. He made his first appearance at "Omaha" beach alongside Sergeant Conti clearing a German bunker of their occupiers. Captain MacKay will then be spotted throughout the campaign levels until his unfortunate death in St.Lo.

Cpt. Mackay at moment the Tiger tank's round hit the dirt behind him 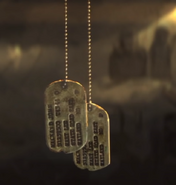 Cpt. Mackay's Dog tags
Add a photo to this gallery
This article is a stub. You can help Company of Heroes Wiki by expanding it.
Retrieved from "https://companyofheroes.fandom.com/wiki/Captain_McKay?oldid=24863"
Community content is available under CC-BY-SA unless otherwise noted.