The SD-2 Butterfly Bomb is a type of air-dropped anti-personnel mine used by the Panzer Elite Luftwaffe Tactics Company, in Company of Heroes: Opposing Fronts. A group of 11 mines are para-dropped together in a target area, and will quickly become camouflaged like all other mines. Enemy infantry stepping on these mines have a good chance to be killed instantly. Vehicles are less vulnerable, but can suffer damage if the mine hits a vulnerable area.

The Panzer Elite are expert mine-layers. In total they have three different types of mines available, each serving a different purpose. The Luftwaffe Tactics Company has access to the most unique type of mine - an airdropped mine called the Butterfly Bomb.

Butterfly Bombs are not installed on the ground: in fact they are dropped from the air. The metal casing holding the explosive charge is hinged, so that its sides can extend to form a set of aerodynamic "wings". These wings guide the entire device to the ground slowly, in a rotating motion similar to falling maple tree seeds. The explosive itself "drops" out of the casing when it opens, hanging down below the bomb and arming itself as soon as it makes contact with the ground.

Butterfly Bombs are dropped in groups of 11, costing 100

100 for the entire group. The bombs are randomly dispersed inside an area 22 meters in radius (read Luftwaffe Tactics#Butterfly Bombs for the exact dispersal pattern). Once they land, they become camouflaged within a few seconds, invisible to enemy units without mine detection.

The trigger mechanism on a Butterfly Bomb will detonate it whenever an enemy unit comes within 2 meters of the mine. Friendly units will not trigger it. The explosion causes damage to any unit within 2 meters. Its force is rather weak, and designed primarily to kill infantry. It will only cause 10-20 points of damage to infantry, but the resulting shrapnel has a 50% chance of killing any infantryman it hits outright regardless of how healthy he is. That chance increases if the infantryman is already injured. The bomb will also cause some mild Suppression.

Vehicles will also trigger the mine when driving over it. Potentially, the mine can cause between 50-100 points of damage to a vehicle - though a single mine will likely cause no damage at all. If the vehicle drives over two or more mines in rapid succession however, it will suffer the listed damage and stands a good chance of receiving additional damage to its engine, treads or wheels.

The use of Butterfly Bombs is meant to dissuade or prevent enemy infantry from accessing a specific area. They can be used to block a certain passageway, or make sure that enemy infantry traveling through that passageway are killed or at least heavily injured. Though they are less effective against vehicles, they can at least slow down an advancing vehicle force - especially if the enemy thinks the bombs are an actual general-purpose minefield.

One particularly good way to use these bombs is directly on top of a sector point. By doing so, you ensure that any enemy infantry units coming to seize that point will either be killed or suffer significant damage. You can repeatedly throw more Butterfly Bombs at the sector as necessary, to replace ones that have already detonated.

You can also use Butterfly Bombs to protect or "mask" a regular mine-field, laid by a Munitions Halftrack. The bombs are landed in front of the mine-field so that enemy infantry will kill themselves on the bombs before reaching the more expensive (and stronger against vehicles) Mines. Vehicles driving through the Butterfly Bomb field may turn back immediately, or they might be encouraged to drive on once they realize that the butterfly bombs do not cause much (or any) damage to them, subsequently running into the actual minefield and possibly being destroyed outright.

Remember that you need direct line-of-sight to an area in order to target it for a bomb drop. Use Camouflaged Kettenkrads for spotting the area without exposing any of your units. If you do this properly, you might even be able to mine the enemy's own territory this way. This is best done by mining a major infantry passageway, or even the area around a Defensive Structure - killing infantry coming to repair that structure whenever it is damaged.

If you can locate an enemy's mine-field, try dropping Butterfly Bombs right on top of that minefield. The enemy tend to regard their own minefields as safe areas, increasing their chance of being careless when moving through them!

When a Butterfly Bomb is still dropping from the air, it is visible to everyone. Enemy units in the vicinity will shoot at the bombs, and can destroy them. This lasts until the mines reach the ground and camouflage themselves. Note that the enemy will see small black "blotches" on the ground for a few seconds after the mines themselves have disappeared from view. Therefore, do not drop mines in an area visible to enemy units, unless you believe the enemy is sufficiently distracted at the time.

SD-2 Butterfly Bomb or Sprengbombe Dickwandig 2 kg (SD2) is German 2 kg anti-personal submunition. Its name came from the thin cylindrical metal outer shell which hinged open when the bomblet deployed, give it the superficial appearance of a large butterfly. The Butterfly Bomb was one of the first cluster bombs and a highly effective anti-personnel weapon. 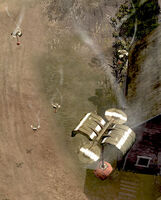 The dropped Butterfly Bomb gave the appearance of a large Butterfly falling from the sky. 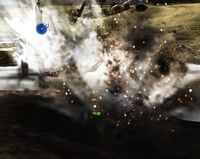 Any enemies who step on the Butterfly Bombs will suffer a terrible fate.
Add a photo to this gallery
Retrieved from "https://companyofheroes.fandom.com/wiki/Butterfly_Bomb?oldid=17701"
Community content is available under CC-BY-SA unless otherwise noted.