The Bofors 40mm or Bofors is a Defensive Structure built by the British (designed by Sweden and licensed and built by numerous Allies in reality), which is featured in Company of Heroes: Opposing Fronts. While originally an anti-aircraft weapon, like most other AA cannons in the game it can just as easily be used against light vehicles, and is accurate enough to pose a threat to Infantry as well. With a 360-degree swivel, this cannon provides multi-purpose protection on the British defensive line.

The British defensive line consists of several components, including the Vickers Machine Gun Emplacement and 17 Pounder AT Gun. Each component is specifically designed to engage a certain type of target. In this mosaic, the Bofors 40mm Cannon takes the middle-ground, providing significant defensive capabilities against light and medium vehicles, but also possessing the strength to destroy infantry and armoured vehicles.

Bofors 40mm Cannons are constructed by Sappers, for the cost of 280

3, and appear on the British player's unit list. Although cheaper than the 17 Pounder AT Gun, the Bofors 40mm takes more time to construct than almost all other emplacements.

The Bofors 40mm Cannon is primarily an anti-aircraft weapon, and will automatically fire at passing aircraft. However, the emplacement is quite capable of depressing its cannon far enough to fire at ground units. It has a good damage output, and the required accuracy to hit both quick vehicles and infantry.

The Bofors 40mm Cannon's impressive range, anti-vehicle capability, and the ability to automatically swivel 360 degrees around its main axis make it somewhat superior to the Vickers Machine Gun Emplacement, which it often replaces when resources allow. Though the Vickers MG is more potent against infantry, these qualities give the Bofors 40mm a significant edge.

Bofors 40mm Cannons are not expected to hold a position on their own, due to the low penetration power of their shells. They are often supported by a 17 Pounder AT Gun and/or other anti-tank weapons. Nonetheless, a Bofors 40mm Cannon can potentially penetrate the rear armor of any enemy tank, if such an opportunity presents itself.

The Bofors 40mm Cannon is named after the cannon installed in this emplacement. It fires a slow burst of several shells, capable of destroying any light vehicle and even infantry.

This weapon was originally designed as an anti-aircraft gun. It fires a slow succession of fast, accurate 40mm shells at enemy aircraft.

The cannon itself is crewed by three men - one to fire the gun, another to rotate it, and a third to reload. When depressed, the cannon can reliably fire at ground units, and swivels fast enough to target quick-moving vehicles, including Motorcycles. The 40mm shells cause between 25 and 35 damage per hit, and can rapidly destroy such vehicles.

The accuracy of the Bofors is quite high, and it can even target infantry. Two or three hits are required to kill a single infantryman, but due to the relatively high firing rate of the cannon, this can usually occur fairly rapidly.

Against heavier targets, the 40mm shells lack the Penetration power to go through the front armor of medium tanks, but will cause damage to a tank's rear armor. Lighter-armored vehicles, such as armored cars, cannot deflect the Bofors shells reliably and will quickly be destroyed under its volleys.

The Bofors 40mm Cannon is an essential part of the British defensive line. While 17 Pounder AT Guns can deal with heavier tanks, and Vickers Machine Gun Emplacements can tackle infantry, neither of these is particularly useful against mid-range units like light vehicles and armored cars. The Bofors 40mm Cannon is used to "seal the gap", providing accurate and powerful anti-vehicle fire.

The primary advantage of the Bofors is that, unlike other emplacements, it can automatically swivel around its center axis to engage targets at any direction. This provides a crucial anti-flanking defense that can support other emplacements.

Therefore, it is best to place a Bofors 40mm Cannon in support of another emplacement. This is especially true in tandem with 17 Pounder AT Guns, since the Bofors can engage infantry while the AT gun takes care of any heavy vehicles. In fact, some players replace their Vickers Machine Gun Emplacements with Bofors 40mm Cannons to save on Population Cap points, sacrificing some anti-infantry capability but gaining 360-degree protection. Make no mistake: a Bofors 40mm Cannon can destroy infantry very well, though it cannot suppress infantry squads like a Vickers Machine Gun Emplacement can.

In rare circumstances, it may be beneficial to place down Bofors 40mm Cannons early on, on their own, ahead of your captured territory. During the early game period, the cannon can probably handle any unit the enemy sends your way, so it does not even need to be supported by infantry or other emplacements. Remember however that it takes 45 seconds to construct this gun - time that might be better used to capture more territory or prepare some longer-lasting defensive positions.

If you do try this tactic, make sure to place the Bofors in a wide-open area where it can cover as much space as possible: its 360-degree swivel will make sure it takes care of any enemy that comes close to its position, regardless of flanking maneuvers. This way, a few well-placed Bofors can keep your lines safe up until the arrival of enemy tanks.

Should the opponents are using Luftwaffe Doctrine, make as much as Bofors 40mm Cannon as possible to prevent enemy Henschel hs 129 from mauling your allies tank position. Making a "cobweb" formation allows your armored units to advance while Bofors 40mm Cannon will provide cover by handling the Aircraft unit to ensure no air units can reach your allies. The risk is your armored units or any units that could be in the way of aircraft may be killed or destroyed due to being "splattered" by Henschel's crash, similar to American's P-47 Thunderbolt when it was shot down by Germany's Anti-Aircraft unit.

Like all other emplacements, the Bofors 40mm Cannon is vulnerable to artillery fire. There is little that can be done against this, except hunting down the launchers or repairing the cannon diligently.

Once tanks arrive on the field, it is crucial to couple the Bofors with a properly-placed 17 Pounder AT Gun. It cannot handle tanks on its own except in very unusual circumstances, and will be destroyed by an opposing tank in short order.

Because the only Axis aircraft seen in the game is the Panzer Elites HS-129 "Panzercnacker", it is quite rare to see the Bofors in its intended role, which is shooting down enemy aircraft.

Like all other British emplacements, if the Bofors 40mm Cannon is damaged severely but not destroyed, its crew will be killed and it will become a neutral weapon. In that case it can be captured by an enemy infantry squad. Allowing this would pose a major threat to you, giving the enemy a gun that can be used to kill your other nearby emplacements, not to mention your infantry and vehicles. Prevent it at all costs!! 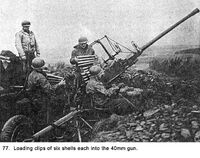 A photograph of a real Bofors 40mm Cannon.
Add a photo to this gallery
Retrieved from "https://companyofheroes.fandom.com/wiki/Bofors_40mm_Cannon?oldid=25428"
Community content is available under CC-BY-SA unless otherwise noted.