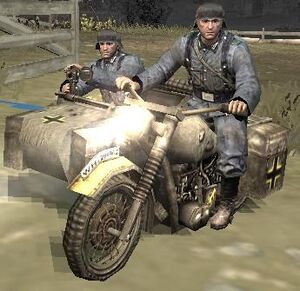 "Motorcycle reporting!" "Let´s find some Amerikaners." "Recon on the move."

The BMW R75 Motorcycle or BMW Assault Bike is an Axis light vehicle featured in Company of Heroes. It is used for scouting and surprise flank attacks.

The BMW R75 Motorcycle is a BMW with an MG42 machine gun fixed to the sidecar. This vehicle is fielded extensively by the Wehrmacht because of its low cost and high speed. It is an effective vehicle at the early stage of the battle. It has good speed and mobility even in rough terrain. Its nimble size also allows it to move into tight spaces such as between buildings. Armed with an MG42 light machine gun, it is used as a raiding unit in the early stage of the battle.

Its good speed also allows it to hunt down elusive snipers and flank 60mm mortar teams Its low cost also allows it to be deployed large in numbers; which can be an effective raider group that can take on most Infantry unit at Tier 1. The motorcycles can also be used in regular combat for infantry support, they are valuable in infantry wars since enemy units without an assigned target will automatically fire on the mbike so instead of reinforcing lost soldeirs that costs a lot of Manpower, the bike can simply be repaired back to full health.

Use it to save flanked MG42s from riflemen, kill snipers, support volksgrenadiers in combat or hunt down enemy engineers capturing strategic points. Wehrmacht players may use such groups to raid strategic points and take on incoming enemy infantry units. Throughout the game it can also serve as a light reconnaissance unit for identifying enemy strategic location and spotter for artillery unit.

It is one of the poorest vehicles in terms of armour protection. Even small arms fire can badly damage it. Conventional light AT weapons such as Anti-Tank Recoilless Rifles, Bazookas, and PIATs can destroy it quickly with minimum casualty. A Browning 30. cal MG team can wipe out a BMW R75 Motorcycle in seconds if the motorbike doesn't flank it quickly. The motorbike is extremely vulnerable to anti-tank and tank fire. Most of these motorcycles will be replaced by better armed and armored vehicle such as SdKfz 251 Half-track and SdKfz 234 Armoured Car during Tier 2 and 3. They are rarely seen and deployed during Tier 4.