BMW R75 Motorcycle is one of the poorest vehicle in terms of armor protection. Even normal Infantry weapons can badly damage it. Conventional light AT weapons such as AT Recoiless Rifle, Bazooka, and PIAT can destroy it quickly with minimum casualty. MG Crew can wipe out a BMW R75 Motorcycle quickly. AT Fire and Tank Fire is not something that the BMW R75 Motorcycle can with withstand or even survive. Most of these motorcycles will be replaced by better armed and armored vehicle such as SdKfz 251 Half-track and SdKfz 234 Armoured Car during Tier 2 and 3. BMW R75 Motorcycles are rarely seen and deployed during Tier 4. 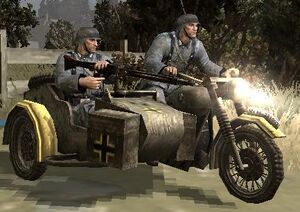 Retrieved from "https://companyofheroes.fandom.com/wiki/BMW_R75_Motorcycle?oldid=3668"
Community content is available under CC-BY-SA unless otherwise noted.