88mm Flak 36 or Flak 88 is an Axis Defensive Structure featured in Company of Heroes and Company of Heroes: Opposing Fronts. It provides direct anti-vehicle and general medium artillery unit fire.

88mm Flak 36 or 88mm Flugabwehr-Kanone 36 is an anti-aircraft and anti-tank artillery gun fielded by both the Wehrmacht and Panzer Elite for heavy defenses.

Constructed by the Pioneer Squad once Axis Commander chooses the Defensive Doctrine.

Designed as an anti-aircraft weapon in the 1920s, the FlaK 36 model was brought into use as a multi-purpose field gun by the German Condor Legion during the Spanish Civil War (1936-1939). It later developed its fearsome reputation during the early stages of WW II, especially in the Battle of France and in the service of the German Afrika Korps.

The 88mm FlaK possessed high muzzle velocity, as it was initially developed for anti-aircraft use. However, the 88mm FlaK mount was designed such that it was not restricted to this role: the barrel could be depressed below horizontal, unlike most other AA weapons, and sights suitable for direct fire were included as part of the weapon. Later, armour-piercing (AP - actually APC) rounds were developed as well and issued alongside the standard HE rounds. As such, the 88mm FlaK served equally well as an AA gun, AT gun and a field artillery piece. Particularly in the AT role, the high muzzle velocity and large calibre allowed the gun to penetrate thick enemy armour at a tremendous range with chilling accuracy. Allied forces learned to fear this do-everything field piece.

In Company of Heroes, the 88mm Flak 36 can only be used in its direct-fire role against ground targets (it also automatically engages aircraft), therefore losing its use as an artillery piece. In spite of this, it's a truly devastating emplacement when set up correctly.

Generally no unit is safe from the Flak 36, unless it is taken quickly, from close range and preferably from behind. Against infantry and buildings, the cannon deploys HE shells to devastating effect. Squads may be slain by a single shot and most structures will quickly fall under the withering fire of the FlaK 36.

The gun's range and calibre should always be respected outmost, as it is one of the longest firing weapons in the game, especially if the gun is being spotted for by another unit; its range and power will decimate any would be attackers.

Each shell delivers a massive 225 points of damage on impact - easily one of the highest damage values among all weapons, roughly in the same category as heavy artillery shells.

Most vehicles and light tanks will be destroyed in one or two shots; heavier tanks will be soon knocked out before they can come in range, and fire upon the gun.

Penetration values for this weapon are all but perfect. At a range of 30 meters (just below sight-range) it has a 90% chance to pierce the front armor of an M26 Pershing, the heaviest Allied vehicle. Needless to say, at this range it will also pierce the front armor on an M4 Sherman with absolute precision. The chance of penetration drops with range, reaching 45% against the Pershing at 75 meters, and 22.5% at 100 meters.

This gun has a maximum fire-range of 100 meters - the longest range of any direct-fire weapon. Naturally, the gun's sight-range is much lower (35 meters, like most other units), so it must utilize forward spotters in order to acquire such far-away targets. The gun is also accurate enough to actually hit its targets at this distance, with a 100% base accuracy against almost all vehicles at up to 75 meters, dropping to 90% at 100 meters. In other words, it will be able to snipe at tanks parked almost 1/4 of the map's length away from its position. Tanks entering the 75-meter zone around the cannon should expect to be hit and penetrated by the weapon.

Even infantry are also extremely vulnerable to the large area of effect of the shell's explosion. Initially, the gun had a reasonably-high chance to hit infantry at most ranges; this was reduced considerably in one patch and then some more in another. Still, the 2-meter blast radius ensures some damage to infantry hiding behind cover - if the gun manages to hit that cover.

A good tactic with this gun is to place one or even several at the end of a chokepoint (such as a long narrow road or a bridge) and have a camouflaged sniper spotting for the gun at the other end of the point. It is also advised to have infantry protect the gun in case something manages to make it through by luck, If applied correctly, this strategy can wreak a lot of havoc upon enemy commanders.

The Flak 88 is a crewed weapon, it gains veterancy through researching Vehicle Veterancy Upgrades, available at the Kampfkraft Center. Each cannon battery, which is already on the battlefield, or will be built, receive proper upgrades. It is worth noting, that this is a support weapon, and if it has been decrewed, and remanned again, it will retrieve the upgrades. These bonuses are cumulative to each other:

As the Flak has a slow rate of fire and turn speed, any would be attack is advised to use this to their advantage when taking the gun out. If you have no other choice, keep your units spread out and use flame or explosives to de-crew the gun quickly. Try to use any hills or buildings to your advantage as this gun is a direct-fire unit and therefore can be outflanked or avoided by using said terrain.

Sniping is considered the best method of de-crewing the Flak 88, as (said before) the unit's slow rate of fire and turning, can be easily exploited by the sniper. If the sniper is not shooting from a direction the cannon is facing in, the cannon will not be able to turn to face the threat before the sniper re-cloaks.

An American paratrooper squad, landed directly on the Flak 88, is also an effective method of decrewing the gun. The gun will not fire at the paratroopers until they land, giving you time to run around the gun while the paratroopers fire.  As an added bonus, the crew can then man the gun and reinforce their own squad on the fly. An alternative strategy is to throw a satchel upon landing and retreating before the gun can turn to meet them.

Facing off with Anti-Tank 57mm, Flak 88 is proven to be quite powerless. Not only the lack of attack speed, Flak 88 also does not have an ability which makes the batteries can be destroyed by 3 to 4 direct hit from AT 57mm.

If you do manage to de-crew the gun, either scuttle it or crew it yourself and turn it on the Axis player foolish enough to abandon it. The last thing you want to see is the flak cannon you disabled minutes ago, with a fresh crew on it, spitting more shells at you.

It should be noted that when the one of the crew members die the guns rate of fire is decreased due to overtaxing the efforts of the crew and after the second member is killed the third will dismount and die on his own.

The Flak 88 engages its victim. 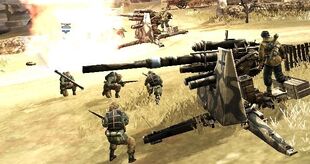 A pair of Flak 88 creates a powerful anti-tank barrier. 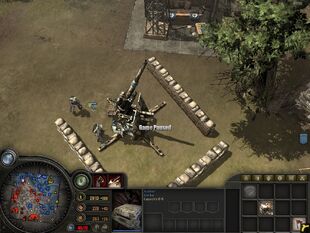 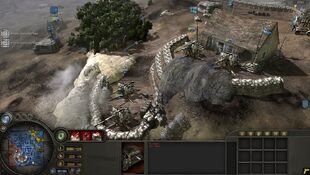 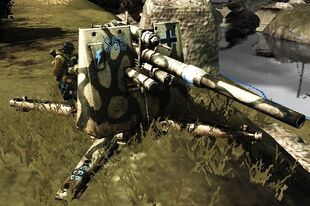 Add a photo to this gallery
Retrieved from "https://companyofheroes.fandom.com/wiki/88mm_Flak_36_AT/AA?oldid=26591"
Community content is available under CC-BY-SA unless otherwise noted.